why this mom quit worrying about "quitting"

(update: bern and i have been working on some major work and home projects as of late. expect me to continue to be a not-so-stellar blogger for another month or two. you can pester me if i'm still absent as of July 1.)

(update 2: benny turned 5 in march. i have some cute pictures of his party. he picked Chuck E. Cheese.)

(update 3: anth turned 8 last week. holy moly. where did the time go? also? where did the pictures go? not on the blog, that's for sure. i'll work on that. on July 2nd, apparently)

(update 4: for anth's birthday? he wants to go the the Carnegie. as in the museum. in pittsburgh. he hears they have great dinosaurs. bless his 80-year-old heart.)

back to our original program. . .

fun fact.
pretty much every time i post a video on the blog, 82% of you can't actually see it.
it's in QuickTime.
that is all i know.

anyway.
anthony loves playing baseball, and is back in practice as of last week.
i'll be sure to not blog about that over the coming months.
after last year's summer Olympics, benny asked us if he could do gymnastics.
so, last fall, we enrolled him in his first class.
it was basically stretching, somersaults, and learning how to use a springboard.
he took this class twice.
when i went to enroll him in the march-may session, the gym suggested i put him in the all-boy ages 5-6 class.
he. was. thrilled.
(he had 3 boys in his first class, and was the only one in his second.)

this seemed like a great idea.
at the time.
what i did not know then was that he would be using equipment he can't actually get on without assistance.
here is some footage...
Video 1:


in case the videos don't work, here are a few lovely photos a la my phone. 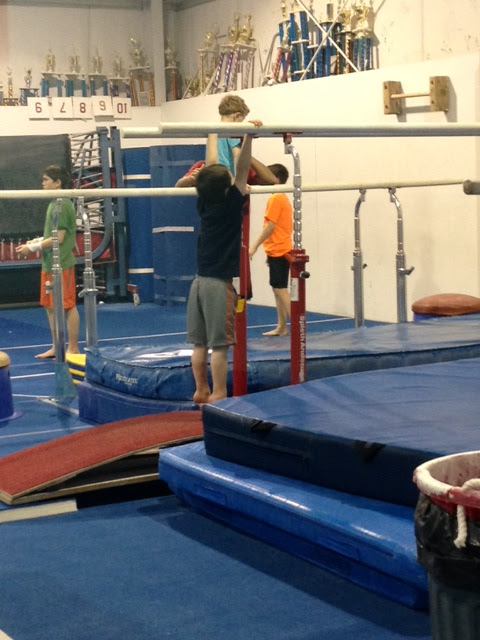 in which benny can touch the parallel bars, when standing on a springboard, on his tip toes.
(that's about it.) 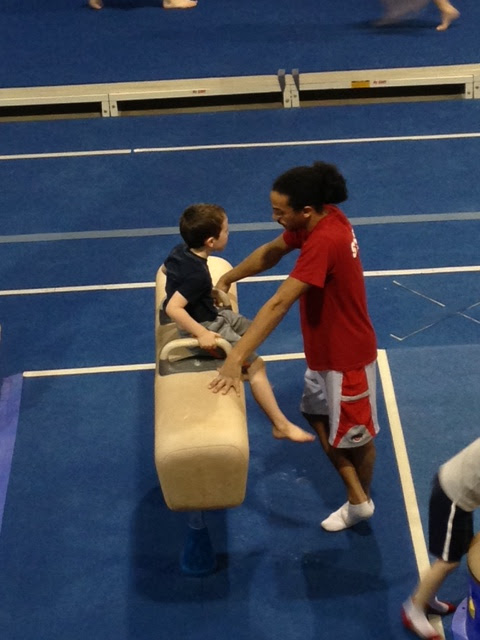 ﻿
in which benny is not actually doing gymnastics.
but, instead, having a discussion with his coach.
who is asking him to focus.
and do some gymnastics. 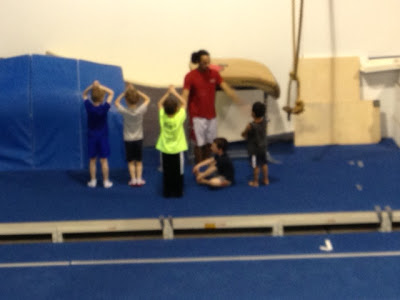 ﻿in which benny is most definitely not doing gymnastics.

suffice it to say, his career as an elite gymnast is not working out.
so far.
in fact, most sessions are quickly coming to points of frustration.
for both him and his coach.

last week, benny told us that he wants to "quit gymnastics."
this has led to some interesting conversations for mom and dad.
we both kind of bristle at the word "quit."
but, in the end, we both also agree that this experience is no longer bringing our sweet little bundle of non-stop-energy anything close to joy.

parenting is a funny thing.
you never really know what is going to trip you up along the way.
only that something inevitably will.

in the end, there are three classes left in his session.
we are not going to make him go.
there will be plenty of other opportunities to teach him not to "quit."
but i would rather save them for times when things are "too hard," or "not going my way," or whatever other reason might get in the way.
i would much rather teach our little man to also listen to his heart.
if i am going to heed the advice of my (far too many) office doodads, perhaps this is a chance to let him learn it is important to:

benny has recently informed us that he wants to "be a baseball player like Anth when i am 6."
this weekend, bern took him to get his own glove, and then the boys headed off to the park together. 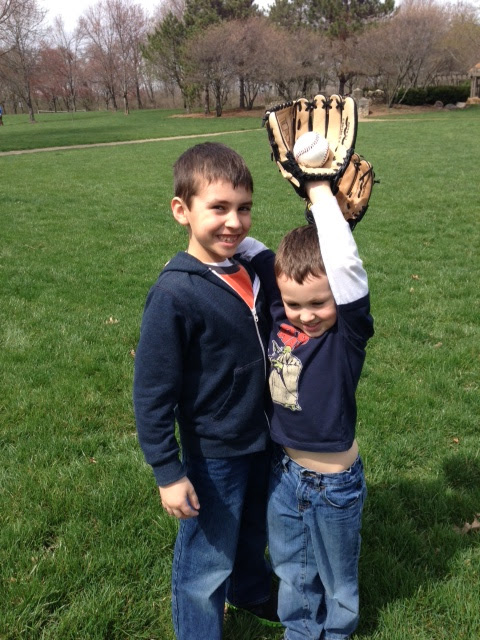 bern sent me this picture while i was at a student banquet yesterday.
while it is clearly not the best shot of the boys that we have, it made my heart happy to see the smile back on our little man's face.