today was the May Day performance in anth's elementary school.
for the second year in a row, bern and i were not able to attend due to work.
anth was nonplussed.

over dessert tonight, we asked him how it went.
eventually, i asked him to sing his song for me.
it was "Shoo Fly, Don't Bother Me!"
which, of course, i remembered from childhood and immediately started singing.
anth immediately told me i was getting it all wrong.
nothing like a little instant feedback.

anyway.
this eventually resulted in anthony teaching all of us how to sing the song.
this included much hand drumming on the kitchen table.
somehow, this evolved into him yelling, "alright everyone, i'm going to line you up!"
anth then moved the lesson to the living room floor and patiently went through each step of the choreography to teach us all the parts of the kids around him.
his instructions included phrases such as, "then mom and i will sashay this way through the tunnel."
(yes, at this point, bern and benny were holding their arms in the air to form a rather low arch.)
anth maintained the slightly annoyed patience of a choreographer working with incompetents.
but he kept at it, and, eventually, bernie and i not only saw the performance, but we saw it through his eyes.
it was pretty wholesome.
(this went on until benny ran away shouting, "now i have to pee!")

it was a perfect little moment at the end of a long day.
amidst the chaos of this year, these are the moments when i tell my hyper little brain to stop planning and just live.
because these beautiful little boys are only getting bigger.
and i'm guessing there will be a time that dancing in the living room with mom won't be at the top of their agenda.

some days are better than others. . .

for those who followed some of my facebook sentiments today, sorry.
there will be some repeats here.
but today was fun enough to bring me back to my long-neglected blog.

one of the honors of serving as the chair of the University Staff Advisory Committee is to represent staff on stage at commencements throughout the year.
last summer, our commencement speaker was Cheryl of Cheryl's Cookies.
in the fall it was Jack Hanna.
this involved some penguins.
and a cheetah.
that entered the stage near me. 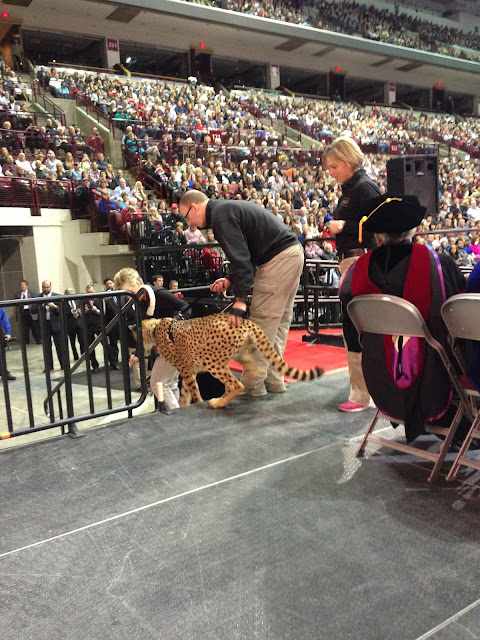 VERY near me.
that was all very exciting.
but today?
takes the cake.
our commencement speaker was President Obama.
my friend Emily offered to trade me her bowl game to go to today's commencement.
i declined.

earlier this week, i received an email saying that, due to where i was parking, my car would be searched  by the U.S. Secret Service.
i cleaned out my hot mess of a trunk to make this more pleasant for everyone. 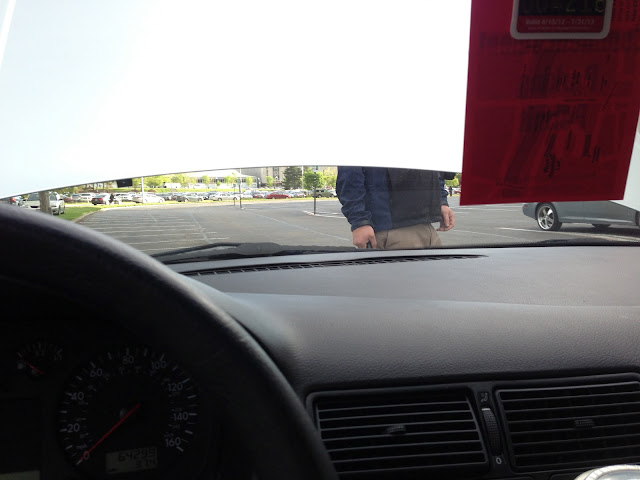 here is my very-"covert"-and-thus-not-really-a-picture-of-anything picture of this process.
it involved wands.
and a dog.
and me being so temporarily nervous about the whole thing that i forgot where the release to my hood was located.
all of this played out to the sweet sounds of the musical Next To Normal.
(which my life tends to be.)
i'm pretty sure the men screening my car were singing along.
(for those with low sarcasm radar - not really.) 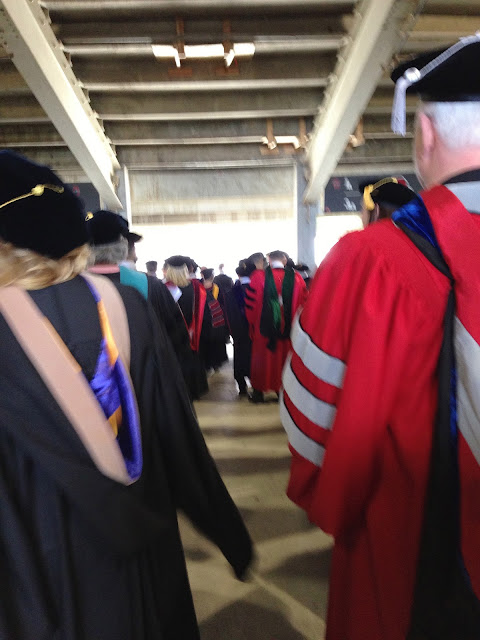 we were asked to arrive at 9am for a noon ceremony, so i ended up engaged in a lovely game of Euchre with some of the other members of the platform group.
which may or may not have ended in my team singing a rendition of "Landslide."
ahem. . .
then it was time to line up for the processional.
this was when President Obama joined our group.
that tiny speck of a head at the front of the line is him.
i promise. 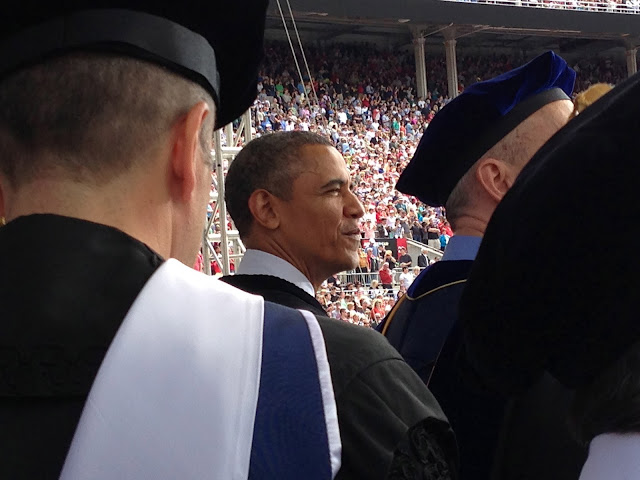 when we got onto stage, i was two rows away from him.
amazing. 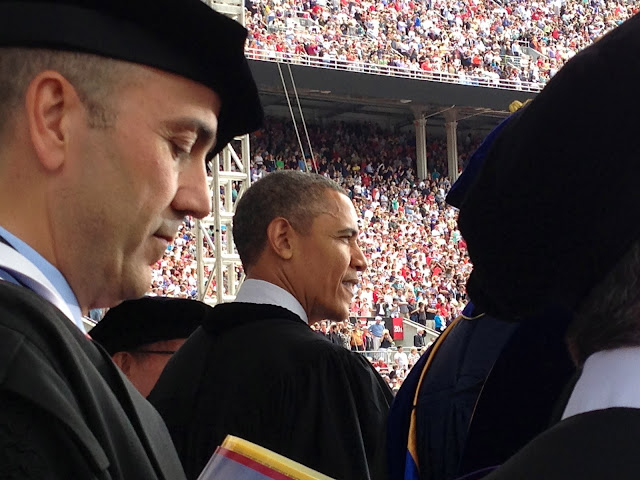 here is the really cool part.
sadly, i don't have an actual photo of it.
as the person representing staff on stage, i had the opportunity to stand up and be announced by President Gee.
this, in and of itself, is pretty darn amazing.
but.
here is where it gets good.
President Obama turned around and looked at me while it was announced.
nodded his head.
and WINKED.

this may not seem significant.
but, as a lifelong winker, this was a big deal.
people who have worked with me at Old Navy, in Baker West, and in University Housing at OSU have all commented on this fact over the years.
i use the wink as a way to acknowledge someone in a setting where i can't actually use words.
so, wink-resistant friends, today i feel validated.
officially.
;)

while i did not get a picture of this moment. . .because even i'm not that awkward. . . the faculty member sitting next to me did get a picture of President Obama turning around and applauding.
yes, i have already emailed Dr. Lee to see if he will share that photo.
because, apparently, that level of awkwardness is perfect for me. 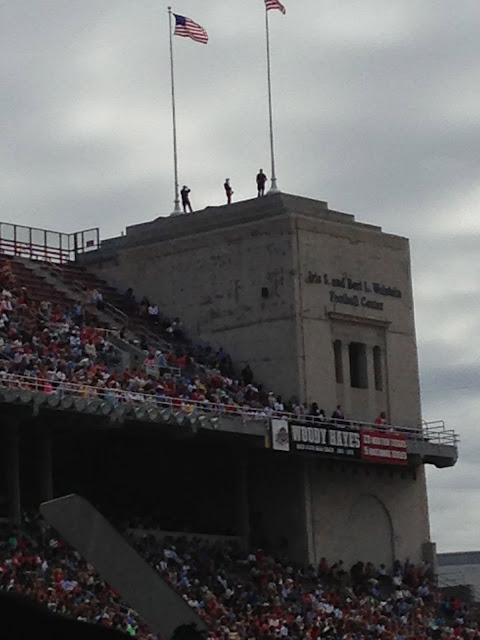 anyway.
we had a little extra security. 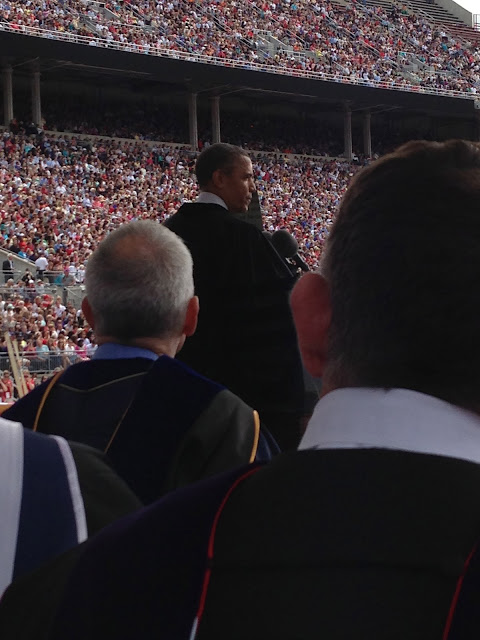 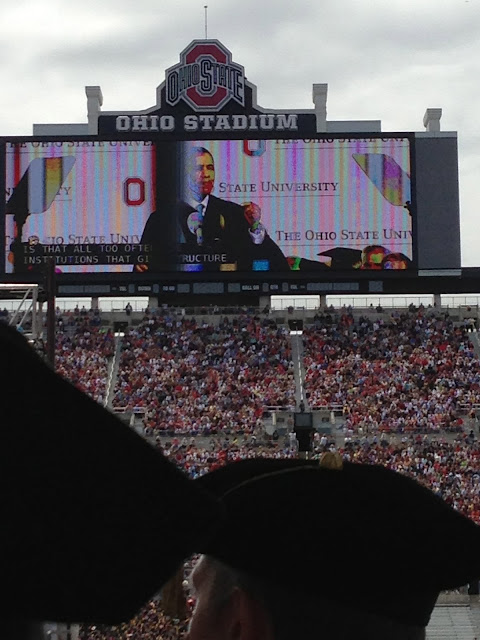 usually i see football here.
i understood what was going on on the jumbo tron much better than usual today. 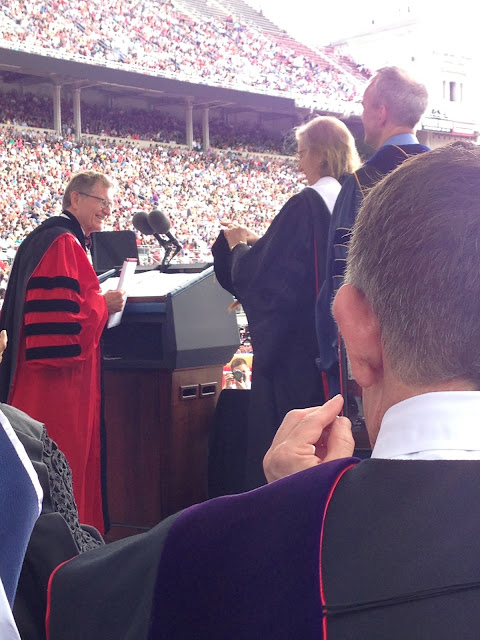 also present today was annie leibovitz.
here she is receiving an honorary degree. 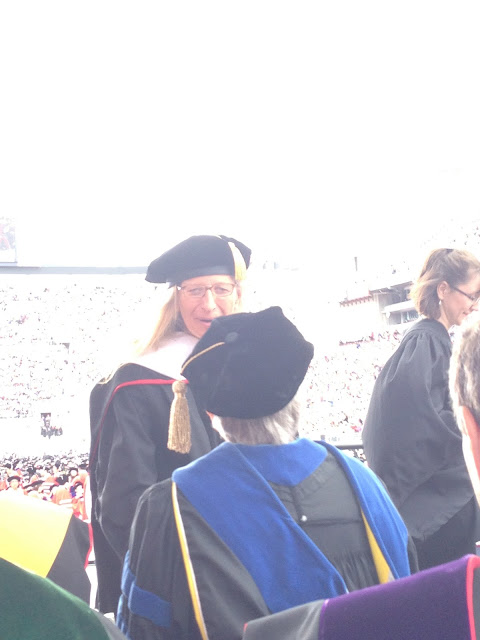 i was in heaven. 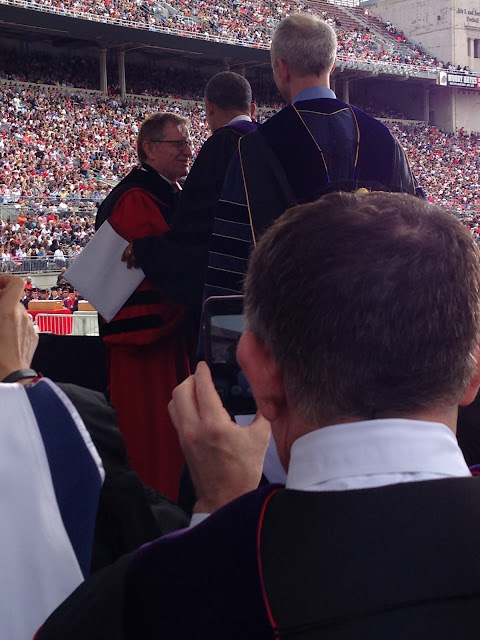 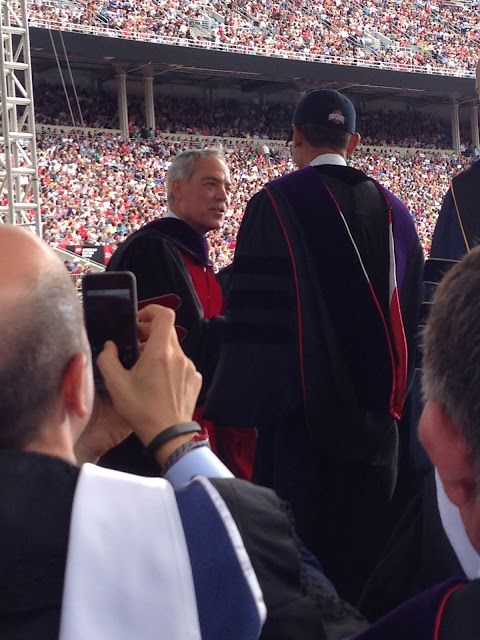 and Buckeye baseball cap.
which always looks sharp with a hood. 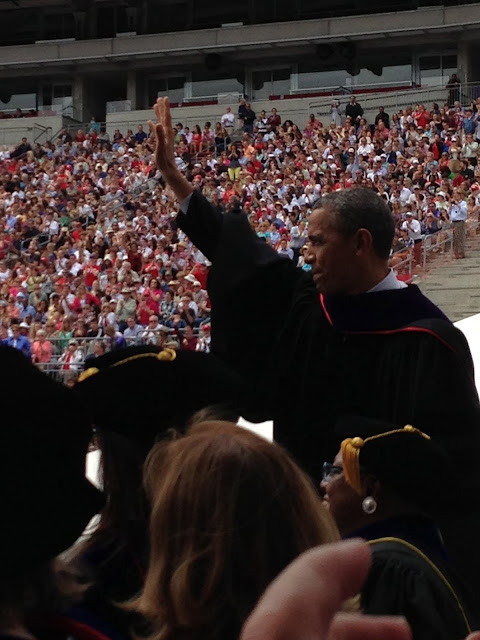 at this point, President Obama left the rest of the ceremony in the university leadership's capable hands.


so.
yep.
perhaps my most festive Cinco de Mayo yet.

congrats to all the students who were honored in today's ceremony!