grandma and grandpa welch are in town from California. (thus, posting may be a tad haphazard for the next two weeks...)


grandma put benny to bed tonight, and grandpa sat down on the couch with anth and i while we did a little "homework." note, this homework is not assigned by his teachers most days. it is generally an assignment du jour of anthony's choosing. today, he wanted to work on numbers.


we had made our way to "4" and anth was working on a line of them in his spiral notebook. i was curious if he had started associating months with numbers, so i asked him, "anth, what does the number four mean to you?"

typically, bern and i wait to go into ben's room in the morning until we hear him in there talking. without fail, benny greets us with a smile and a poopy diaper.

for some reason, we generally greet him with "do you have poopoo for me?" (oh, like you don't do anything strange on a daily basis.) why we ask this, i have no idea, as the smell that hits you as you walk in the door answers the question before it is asked.

ben, without fail, cheerfully throws his arms into the universal pick-me-up position and responds "i hab a poopie fo' you!"

recently, bern left for work early, so i went in to perform the usual routine. which turned into a "dialogue" ending with benny crossing his arms to adamantly declare "NO, MAMMA! I made dis poopie for my daddy!"

perhaps we have added a little too much excitement to our end of this exchange for him to take his "offering" to be such an honor.

♥ posted by momma savvy at 10:08 PM No comments: Links to this post

"Hey, dad! Look! Those squirrels are doing the tango!"

-anth, watching Ice Age 3.
further evidence that he has been exposed to excessive amounts of So You Think You Can Dance. (just as mommy planned it...)

♥ posted by momma savvy at 9:37 PM No comments: Links to this post

i have been debating donating (AKA, hacking off) my hair.
a decision of this nature requires some (AKA excessive) verbal processing on my part.
while driving home today, i asked the boys (AKA strapped down audience) if i should go ahead and cut my hair short.


anth's initial response..."mom, you've been talking about this for like, 10 weeks."
(basically, true)
followed by, "dad just bought me new safety scissors."
i suggested that i might, like he, seek out a professional for help with this adventure.
he agreed that this was a good idea.


i turned the car radio back up and all was quiet for a bit.
then, "hey, mom? i think this is a decision you need to make for yourself."


...special. my 5-year old is reflecting back my mommyisms.
♥ posted by momma savvy at 7:46 PM 2 comments: Links to this post

they say that a picture is worth a thousand words. 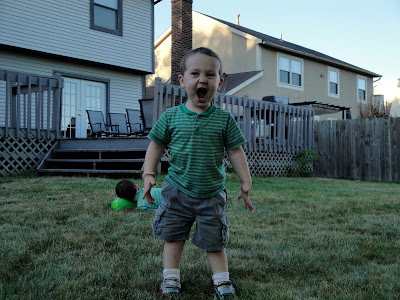 i believe that this one is.
some of those words might include:
anth, inflatable bat, ground.
ben, screaming.
i just don't quite know what the rest of the words are.
or what, exactly, happened to anthony.
♥ posted by momma savvy at 4:53 PM No comments: Links to this post

the residents moved back in to the halls last weekend.
welcome week is nearing its end and classes have begun again.
for some unknown reason, this reminded me of this...


anth came into the kitchen and asked me to come to the living room.
here, he had the television on pause.
he asked me to rewind it.
he wanted to show me a commercial for the new game he wanted.


which is, essentially, beer pong with a board game included.
this is what i get for raising my child in a collegiate setting.
superb.
♥ posted by momma savvy at 9:07 PM No comments: Links to this post

anth was working on one of his first kindergarten homework assignments tonight. the topic was measuring. he was asked to:


fair enough.
the first item anth chose to measure was a 3x3 inch Mickey Mouse board book of his brother's.
he focused, measured it accurately, and then drew a picture in his notebook.
then i reminded him that he needed to figure out a way to show his teachers what he found out on paper.
he put his head down for a minute in thought. then he looked up at me and asked if i could help him spell "Dear Donna and Leann, you could probably already tell this by yourself but this book is 3 inches."
(i normally allow him to stay his course, but seeing as he is new to this classroom, i thought perhaps this statement might be misconstrued in its sincerity. in the end we agreed on "this book is 3 inches.")
♥ posted by momma savvy at 9:10 PM 1 comment: Links to this post 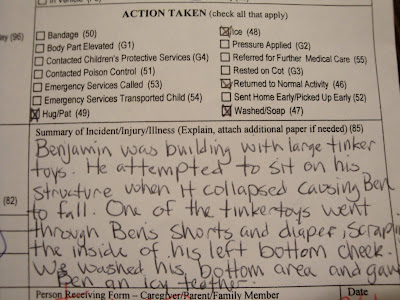 other kids build structures out of common toys.
perhaps other kids also decide, when they are done building,
to sit on said structures.
but, do other little ones do it with enough moxy to rip through not only their shorts, but their diaper as well?
with enough flair to leave diaper stuck inside the Tinker Toy?
these are the things i am left to ponder.
♥ posted by momma savvy at 9:49 PM No comments: Links to this post

ben has had a few rather...fiesty...moments this weekend.
yesterday he was not highly interested in doing whatever it was i was asking him to do.
he was verbalizing this to me.
loudly.
some might say at the top of his lungs.
i wandered into the kitchen to grab him some water and anth followed me in.
i commented to anth, "geez, your brother can sure be loud."
anth looked me, deadpan, "oh, i know, mom. i don't know why you raised him that way."
♥ posted by momma savvy at 9:44 PM No comments: Links to this post

Email ThisBlogThis!Share to TwitterShare to FacebookShare to Pinterest
Labels: anth and benny, commentary

what a ben wants 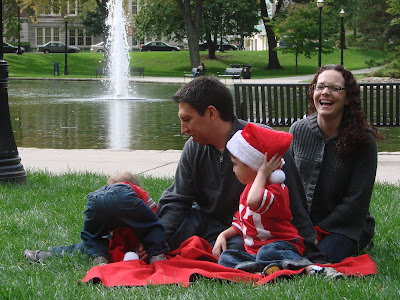 yay! My Savvy Boys is back in action﻿.
this week's Friday Failed Photo seems a bit unseasonable.
generally, this is the time of year i start to think about taking pictures of the boys for our annual holiday card.
i'm a planner. i can't help it.
i am ridiculously excited this year because a gem of a woman i used to work with in Baker West at OSU is working to launch a photography business and has offered to shoot the boys.
(with her camera.)
comparing the most recent Priscilla Joy Photography images on guiltylittlepleasure.blogspot.com
to this photo that didn't make the cut last year,
i would say that there is only room to go up.
(also...so much love and thanks to the lovely Eric Emch for the new header. and the patience. and the OTC logo. genius. always. )
♥ posted by momma savvy at 11:47 PM No comments: Links to this post

here, momma. i can fix it wif my hamm-o.


-benny, requesting a hammer. to "fix" his diaper rash.
♥ posted by momma savvy at 10:39 PM No comments: Links to this post

mom...do you ever get tired of me
teaching you new stuff all the time?


-anth, after showing me a "little secret trick"on the game Angry Birds
♥ posted by momma savvy at 6:09 PM No comments: Links to this post

-benny, sleepily saying goodnight...to his mother.
♥ posted by momma savvy at 10:44 PM No comments: Links to this post

tonight, benny begged to take a shower like his big brother.
though surprised, we were fine with this little adventure.
until we hit one small snag.
he didn’t want us to open the shower curtain to help him.
he felt that he was, somehow, more naked than usual at bathtime.
♥ posted by momma savvy at 11:37 PM 1 comment: Links to this post 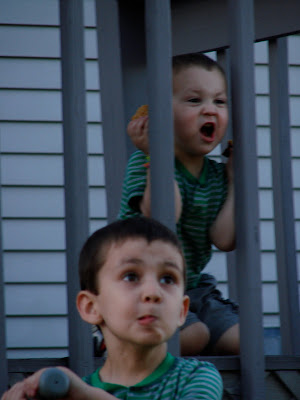 my sister katie and her boyfriend jeff were in town this week from kaua’i.
the boys enjoyed playing baseball with jeff.
more accurately, anth enjoyed playing baseball.
ben enjoyed eating cookies and cheering on his big brother.
this shot is pure expression.
(photo shared by kelly ignatoski!)
♥ posted by momma savvy at 9:10 PM No comments: Links to this post

benny has been on a buzz lightyear kick these days.
he regularly introduces himself as “buzz ben.”
apparently, ben refused to go into the restroom for a diaper change at daycare this week until his teacher officially addressed him as “buzz lightyear.”
thankfully, his teacher played along and our favorite space ranger successfully averted diaper rash for one more day.
♥ posted by momma savvy at 10:45 PM No comments: Links to this post

Email ThisBlogThis!Share to TwitterShare to FacebookShare to Pinterest
Labels: benny

anth made it as far as he could watching the OSU v Marshall game before he asked to play games on my phone. he was soon engrossed in his recent favorite, “angry birds.”
at one point, the commentator…commented on the extreme length of Cameron Hayward’s arms.
i asked bern if he was talking about his “wingspan” or if his arms were literally a little bit longer than average.
bern and i were discussing this trend in athletes when anth, without looking up or missing a beat in his game, offered up “or, guys, maybe the rest of his body just came out a little bit short.”
note to self: they are ALWAYS listening.
♥ posted by momma savvy at 11:11 PM No comments: Links to this post 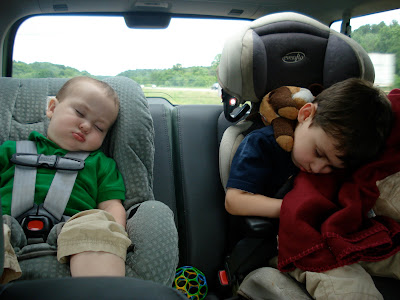 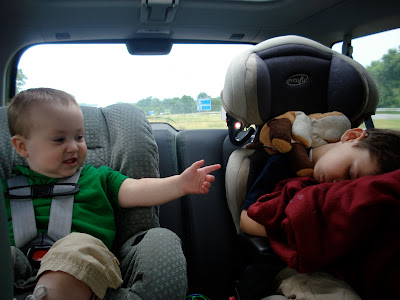 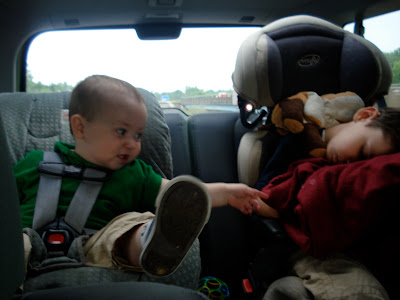 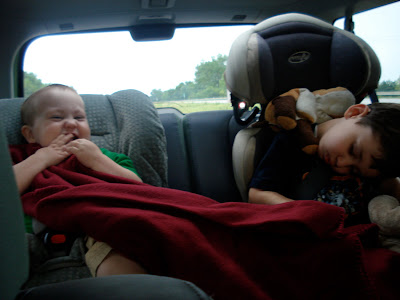 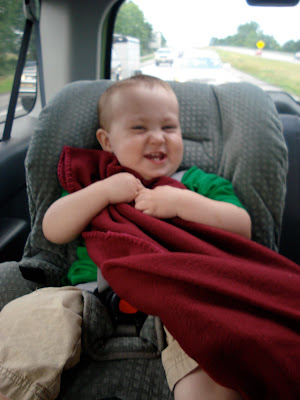 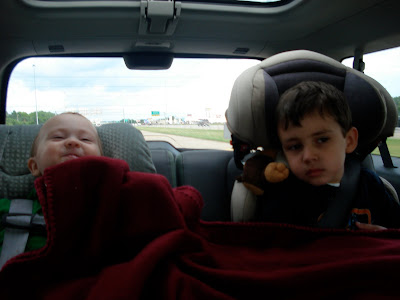 benny shares his spoils... but continues to gloat
♥ posted by momma savvy at 7:53 PM No comments: Links to this post

it’s game day here on campus.
like a good buckeye family, we were dressed accordingly.
it still caught me completely off-guard when, as we were walking into daycare, benny shouted “i love your birthday suit!!!” to his daddy.
i was momentarily confused.
until i realized that “i lub yo’ burgay suit,” in fact, translated to “i love your buckeye shirt!”
oops.
even mom translates incorrectly on occasion.
and, GO BUCKS!
♥ posted by momma savvy at 7:26 PM No comments: Links to this post 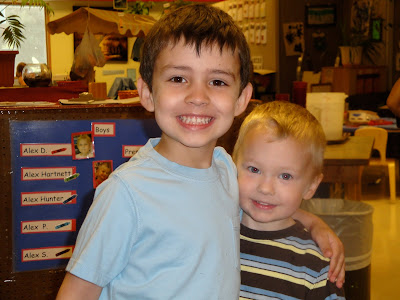 anth has been an active participant and contributor to this blog since day one.

he generally considers it his blog.

he tells his friends to "check out his website."

basically, i'm just here to do the typing.

tonight anth asked if he could post a picture "to help remember his pre-school days."

seeing as this is his website, i figured i should honor that request.

this is the one he choose.