A Tale of Two Savvys


(note: apparently, this kind of thing doesn't update itself on it's own. oops. the last time krystyne was here was 4/6/14.)

(I lovingly borrowed this format from www.kevinandamanda.com, who modeled her section after the Real Couple Interviews on TheNest.com. why reinvent wheels, right?)


Our Home: After living on campus for over a decade as a requirement of our jobs, we purchased our first home in 2006. we recently bought a home closer to campus in the summer of 2013, and are loving the extra time we have with the boys as a result!

How We Met: Though we technically met through our Masters  program (College Student Personnel) at BGSU, I actually site Dr.
Carolyn Palmer as our more specific matchmaker. Because my graduate assistantship was with a cooperating college, BG had me and the other "off-offers" pile into BG together for the summer to adjust to classes before we all moved off to our respective institutions. Bernie had an assistantship on campus, and thus started classes in the fall. Aside from seeing him at an occasional “event,” we did not technically have classes together for a few semesters - which is where Carolyn played her part. She invited Bernie and I, individually, to serve on a panel for a presentation at the Great Lakes Association of College and University Housing Officers conference in the fall of 2000. Most any form of public speaking makes me die a little inside. Even more so a decade ago. So, my first actual sentence to my lifelong dreamboat was actually, "hi, you're going to have to help me, because i'm so nervous i might pee myself." i mean, really...what guy is not won over by such class and charm?

Engagement: bern told me to get dressed up for a surprise date one Saturday in September of 2001 and he sent me on a scavenger hunt of clues to all of the places that were near and dear to us at the time, from the CSP office to the site of our first date. Because he knew i felt particularly land-locked in Bowling Green, he led me up to a restaurant on the water in Toledo and proposed by the closest thing to ocean that we had.

Married:
11 years as of December 2013
Hooray!
It was a Christmas-themed wedding driven by a
rat-pack soundtrack.
First dance: I Love You (For Sentimental  Reasons)
love.

Careers & Education:
Bernie works with undergraduate students through the world of academic affairs. He graduated from Ohio State University with a bachelor's degree in Political Science. He went on to get his Masters in College Student Personnel from Bowling Green State University, and is completed his MBA from at OSU's Fisher School of Business in March 2011. 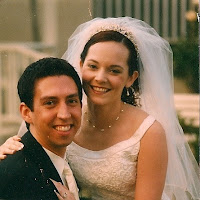 Krystyne also works at Ohio State, serving as the Associate Director of Policy and Planning in the Center for the Study of Student Life. I went to University of California at Irvine for my bachelor's in English, and met Bernie while completing the same CSP degree at BGSU. We were actually originally hired as a package deal at OSU, and served together as Hall Directors for four years. Those who know me well know that I have an eternal soft spot for Baker West, the arts-based building I worked in for my full 4 years, as well as Off The Lake productions, the musical theatre/community service based organization I advised for 8 years. I was then an Assistant Director in Residence Life for 7 years, and I will be starting my PhD in Higher Education and Student Affairs in the fall of 2014!

Fantasy Buy:
Bernie generally wants the newest genius creation by Steve Jobs and his friends at Apple.
Krystyne dreams of a self-cleaning house with bigger kitchen/her own craft room.
﻿ ﻿ ﻿


The Boys: each have their own little section of the blog. These are sadly underdeveloped and are my next project on the mysavvyboys to-do list. but, seeing as I try to spend time with them when they are awake, it’s slow-going…

Biggest Points of Contention: Bernie perpetually leaves the door to our poorly-insulated master closet open. I always steal the “good seat” on the couch.

Krystyne’s Hobbies/Interests/Favorite Things: reading fiction, knitting, scrapbooking, card-making, baking, musical theatre, eeyore, collecting fun new pens and office supplies, and journals. i want to get a “big kid” camera and take some lessons. i adore things that are well written. (yes, i realize the ridiculousness of this statement considering my lazy style of writing on this blog. i am referring to when someone else puts something on paper that makes me stop in my tracks and re-read it simply because it was captured beautifully.) i recall loving naps. i love birds, (especially owls/doves/mockingbirds), trees and things with hearts on them. yes, the hearts are cheesy, but what better thing is there than love? i hear it’s just what the world needs now.

Bernie’s Hobbies & Interests: Watching college basketball, football (college or pro), and almost anything related to politics; reading about current events (ideally from the Economist), or biographies and non-fiction lit about early American history/political figures; collecting random facts (later to be used watching Jeopardy); Listening to NPR and AM radio; Coveting new technology and gadgets; Cheering on his Buckeyes!
﻿﻿ ﻿﻿


On Weeknights: our favorite shows to watch together are Jeopardy, Modern Family and Parenthood. We are excited baseball to get rolling this spring, as the boys will both be participating for the first time. (I hope the boys will someday want to do theatre, while bernie dreams of basketball. Anth recently declared he would like to take up golf, which is exciting to neither of us.)

﻿﻿ The Remote: When I have control, I love SYTYCD, House (i can't retire this even after it's over), Grey’s, Parenthood, Pretty Little Liars, Project Runway, and I miss Gilmore Girls and ER terribly.

When Bern has the remote, he enjoys comedies like Community and Modern Family, news and political commentary like NBC's Nightly News, the Daily Show (bridging news and comedy) or Meet the Press, and most anything sports related (except Hockey!) on ESPN.

My Savvy Posts: i was recently asked how i manage to remember all of the things the boys say. (i am choosing not to take that as a comment on my general ability to remember anything these days. haha.) i have a notebook in my bedroom and one downstairs that i use to jot down the gist of some things and the really good direct quotes that I don’t want to mix up later. i also have a “blog” section on the Notes function on my phone with quite the list of snippets. sometimes the boys give me a few good ones in one day. if i’m feeling ambitious, i get a few of those written out and queued up on Blogger. for the dry spells. i feel like it puts less pressure on the boys. and, most importantly, i just listen.

Evolution of the Blog: i had a really hard time with this, but over the last year or so i have made two conscious choices:
1) i post less often. though i love the catharsis and creativity of writing, i love spending time with my three boys even more.
2) i add a little bit more about me to the blog these days. again, this required some processing. this originated as a place to read about the antics of my little ones. but, we are all whole people, and being a mom, partner, employee, family member and friend are all important roles to me. so i'm choosing to throw it all out there. take or leave what you will!

thanks for following the antics and adventures of our "savvy" boys!