okay, first off, remember when i used to regularly post tragic photos on fridays?
and call it Fail Photo Friday?
yep. i kind of do, too.
oops.
partly, i haven't been doing this because the kids are getting older and i'm trying not to be terribly insensitive.
but, also, i haven't really been uploading pictures all that often.
or, even, remembering to bring my camera with me when i go somewhere.
as in, i literally have TWO PICTURE'S of anth's entire 1st grade baseball season.
both taken on my phone.
one of them does not actually include anthony.
but, that is for another post...

anyway.
yesterday, i remembered that our favorite photographer, Priscilla, was kind enough to send us some of the less-than-awesome moments from our photo shoot last fall.
july seems like a great time to roll these out.
right?
right.
and, i am owning in advance that i will likely be really bad at posting between now and August 12th.
becuase the Olypmics start tonight!
yay!
so, if i can even muster up minimal attention to posting, you will be getting a series of the "fail photos" from last year's family photo shoot.
but i make no promises.
once again, my numbering of these leaves much to be desired.
seeing as there were two "55s" when i searched "fail photos" on my own blog, i decided, let's round up again.

i am really excited for the Olympics.
the last time they were on i had a 3-year-old and a 4-month-old.
so, let's be real, it's kind of been 8 years since i really remember watching them.
so far, this has been the prep list: 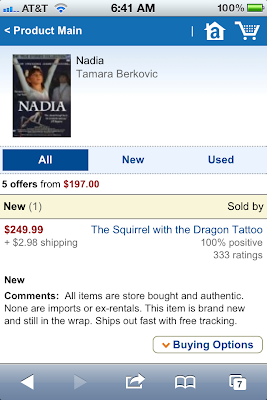 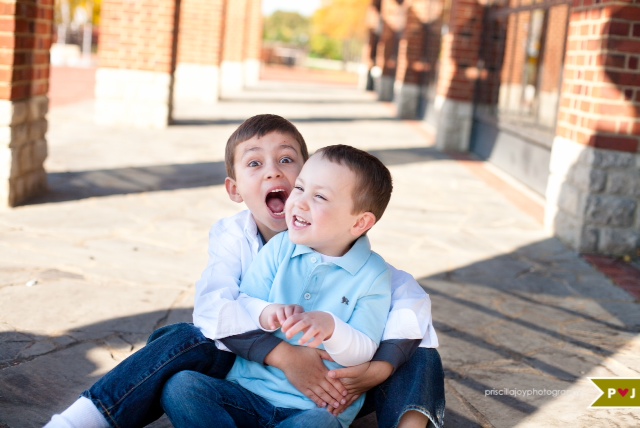 want to know what, ironically, does not make me happy?
benny singing Bobby McFerrin's Don't Worry Be Happy on repeat for an hour in Target.
loudly.
with an emphasis on the high-pitched "doo-doo-doos."

funny how that works.
♥ posted by momma savvy at 9:42 PM No comments:

well.
the moves aren't exactly like Jagger's.
but benny definitely has some "new moves" these days.

in the last few weeks, ben has also developed an interest in watching So You Think You Can Dance along with Anth.
and, recently, much to my heart's sheer joy, he was watching the gymnastics trials along with the rest of us.
for the last few nights, this has resulted in a fun new evening routine:
1. bath time.
2. reading. and then,
3. dance party.
the dance party involves me/bern/anth sitting in the boys' room, and playing a song from our phone.
and then sitting back and enjoying watching benny put on a show.
his current version of dancing usually involves running in a circle around the room, spinning mid air, slightly falling on the landing, and doing his best to make it look like an intentional on-the-ground-spin.
(perhaps i should reconsider if this is the best timing for a high-energy activity in the night time routine...)
i would say that it is hilarious.
which it kind of is.
but, at the heart of it, it is absolutely precious.
he absolutely beams when he is done with his performance and is quite proud of himself.
love. love. love.

on the way in to work last week, he told me we need to watch more dance shows so he "can study more new moves."
clearly, i need to get him into a class.
(local people with suggestions, i'm all ears.)

sadly, i tried to take video last night, but i have so many pictures on my phone that i couldn't record.
oops.
but, i did find a few fun pictures to share in the meantime while i get myself together.

recently, ben was playing with some modeling clay.
together, we made a dragon.
ish.
here he is: 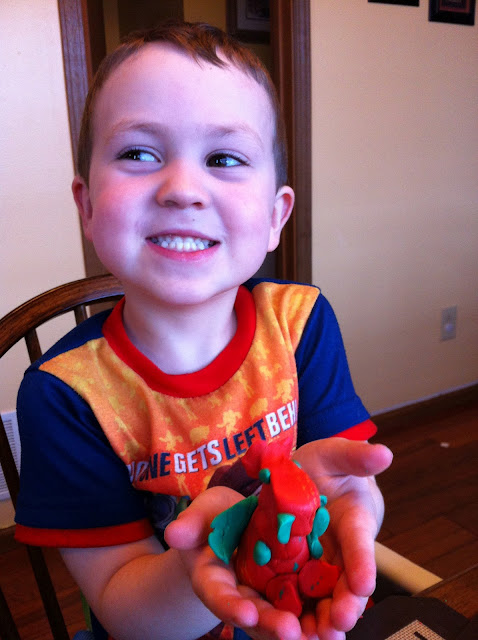 i sat down on the other side of the kitchen table, and told him i wanted to get another picture of what he could do.
at which point he did this: 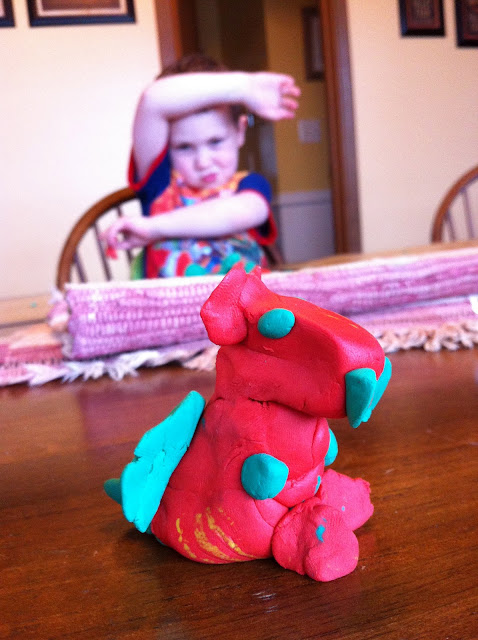 perhaps i should be more clear as to which skill set i am trying to demonstrate when taking photos of him.
because here he is again, showing me what "he can do" on a bike: ﻿clearly, this picture is mainly about his cycling abilities..
i will work to get video of an upcoming performance.
watch out, Nigel...
♥ posted by momma savvy at 9:05 PM No comments:

before they lived on top of our fridge. . .

the boys had lightsabers they were in love with.
actually, they are still in love with their lightsabers.
they are also in love with battling, intensely, with said sabers.
but, because bernie and i are more in love with our sons. . . and their faces. . . the lightsabers have been living on top of our fridge for the last month or so.
along with a Thor hammer and a Captain America shield.
they have come down a few times with the warning that they need to be "used nicely."
they have, each time, quickly landed back on the fridge.

tonight, we started the first day of Senior Staff training for our full-time and graduate level staff.
this is absolutely nutty to me, as we are usually doing this later in August, but the change from quarters to semesters at Ohio State is squishing our summer.
anyway, i've been working to catch up and try to prep for the week ahead tonight, and needed a brief distraction.
so, i opened up the old list of drafts and found this old post that i apparently never used.
all it has is a bunch of pictures of the boys messing around in the dark with their weapons of choice.
check out anthony.
the kid is intense. 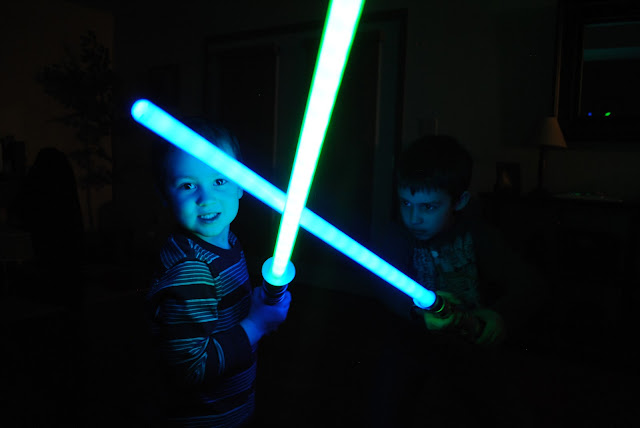 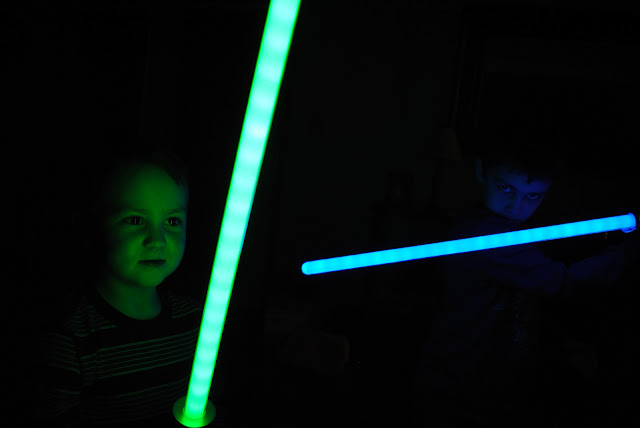 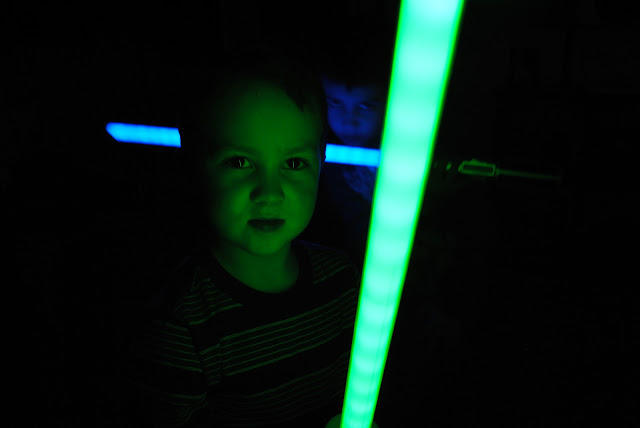 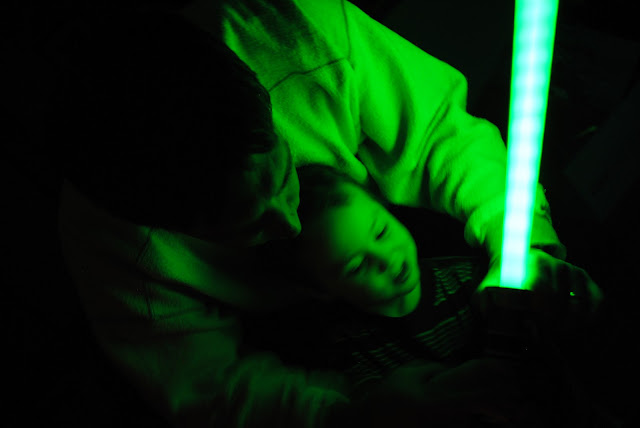 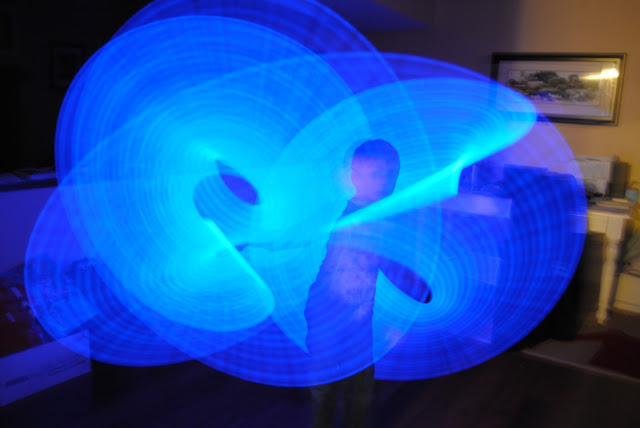 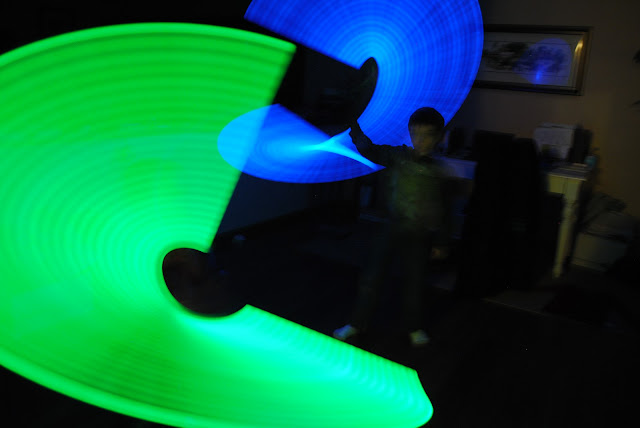 yep.
that's all i'm good for tonight.
may the force be with you.
♥ posted by momma savvy at 9:38 PM No comments:

remember that time. . .
on tuesday night. . .
when your partner decided to work late. . .
and you realized you had nothing respectable enough in your fridge to serve to your children and label as "dinner". . .
so you ran the boys into Kroger to grab some essentials. . .
and then you shuffled them to the self-check-out station. . .
which you used impressively quickly. . .
and then you couldn't leave. . .
because your youngest child was practically sitting on the ground. . .
with both his arms and legs wrapped around a pole next to the check out. . .
and he was wiggling and protesting loudly. . .
by shouting, "but i don't wanna go yet! i'm dancing' on this pole!"
and you were feeling like the Parent of The Year nomination committee would be really impressed?


no?
you don't remember that?
of course you don't.
because it was me.
and ben.
doing our best to keep the folks behind us in line entertained at 6:17 on a Tuesday night.


Dear patrons of the Dublin Kroger,


you.
are.
welcome.
i hope that my family and i made you feel slightly better about your day.


this post was brought to you by Arlene Guess, former resident of Baker Hall West.
not because pole-dancing makes me think of her.
but because she lovingly reminded me, via Facebook, that i once again am way behind on blogging.
♥ posted by momma savvy at 8:39 PM No comments: