earlier this week, i was summoned to the living room by benny.
and by summoned, i mean, he was screaming, "mom!! HEEEEELLLLPPP!"
i had been in the living room with him approximately 1 minute earlier to give him a bagel and milk.

because of the urgency in his voice, i basically ran into the living room.
what i found did not appear to be an urgent scene.
benny was sitting with his legs out on the couch.
he was holding his hands above his head, a bagel plate in one and the milk in the other.
and he was looking longingly at the blanket on the ground beside the couch.

it was clear that i had been brought there to apply the blanket to my small child.
but, because we are trying to teach our boys to ask nicely for the things they want, i asked, "hey, benny. what's wrong?"

and, because he is at a rather literal stage in his life, he took a moment to think about my question.
then he looked at me, deadpan, and said, "i don't have four arms."

and they kind of are.
...except that babies come with one very critical added bonus.
diapers.
i never ONCE wondered if anth or benny might poop on the floor when they were 12 weeks old.
for several reasons.
one, i knew they were wherever i put them.
two, because tiny humans are not mobile.
(this is kind of an awesome design.)
three, THEY. WORE. DIAPERS.
this being said, I haven't managed to find much time to post about the latest addition to the Savvy clan. 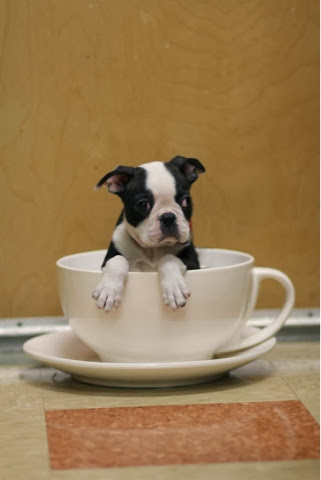 this was last Friday, the day we picked up Rocky.
this photo was taken at the vet's office in their Pup in a Cup prop.
no, he's not THAT tiny. 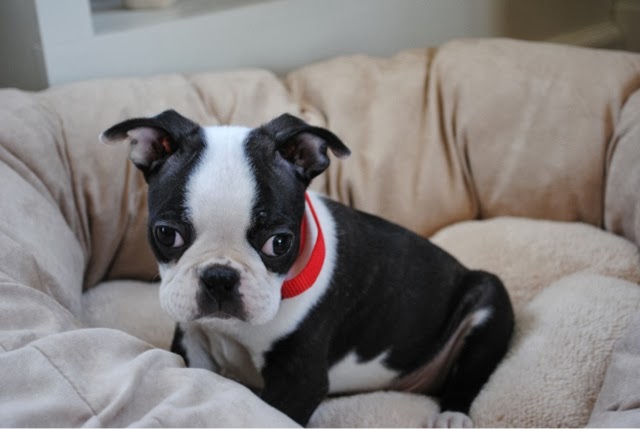 and this was little man getting cozy in his bed.
that i didn't even have to TRY to introduce to him.
he just saw it and assumed. 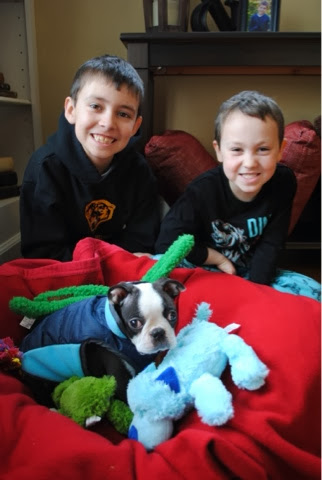 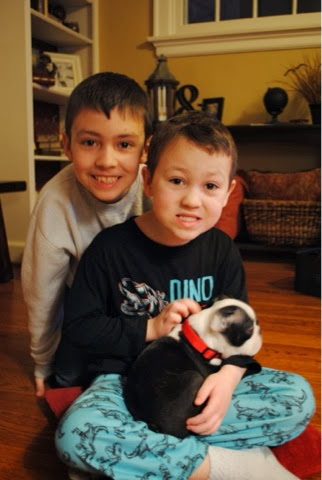 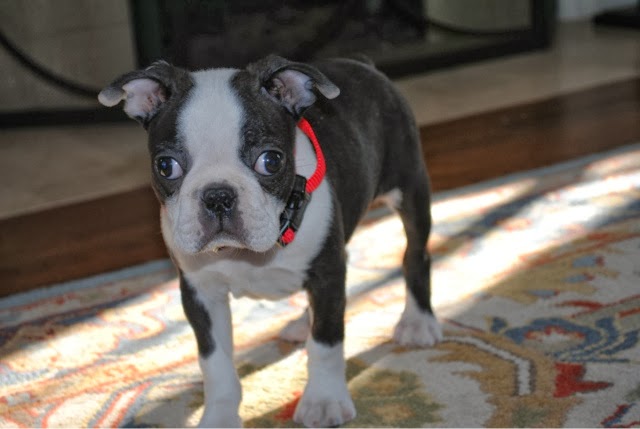 he still looked a little anxious on day 1. things have settled in a bit now.
a bit. 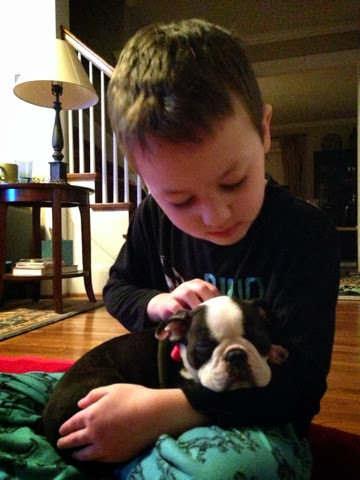 ben likes him best when he is sleeping. 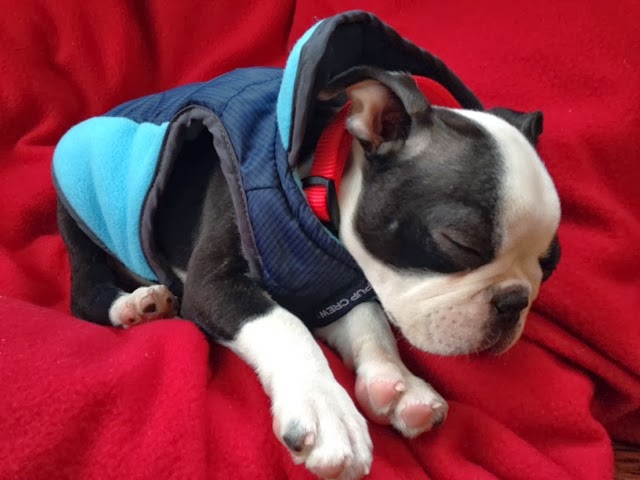 and, of course, we chose a dog that doesn't do well in extremely cold (or hot) weather.
during the worst winter in some time.
so, this is his vest.
sometimes just the idea of taking it on and off is exhausting to him. 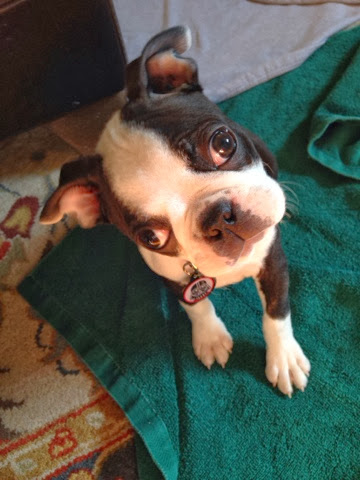 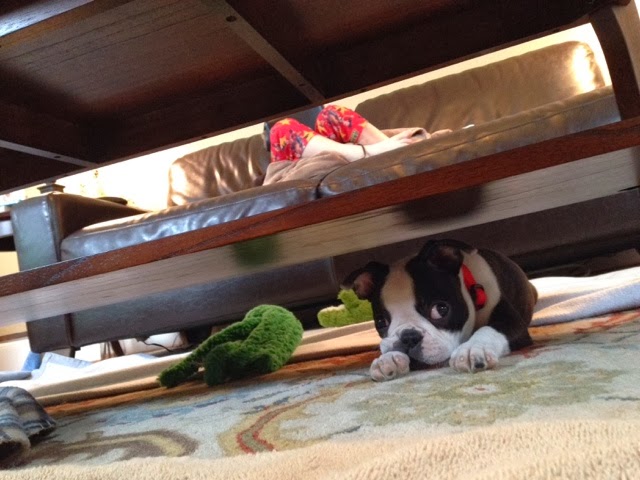 he basically has the entire first floor at his disposal while we are able to be with him.
but this.
this 4-inch floor-to-ceiling spot?
clearly the place to be. 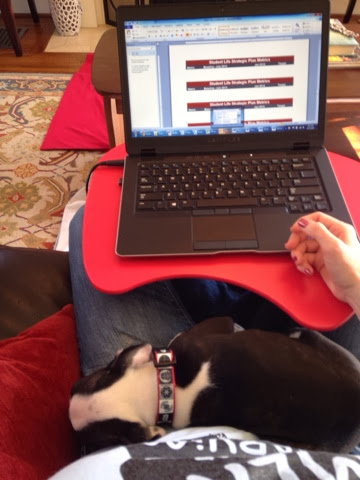 also.
this is what "productivity" currently looks like for me.
"productivity" has morphed and shifted and been reinvented many times for me since anth entered the scene in April of 2005, so this is just a new iteration.
i kind of wish i had a similar photo of benny or anth splayed across my lap like this, but I didn't actually do that.
i promise.
(perhaps because i didn't think of it.) 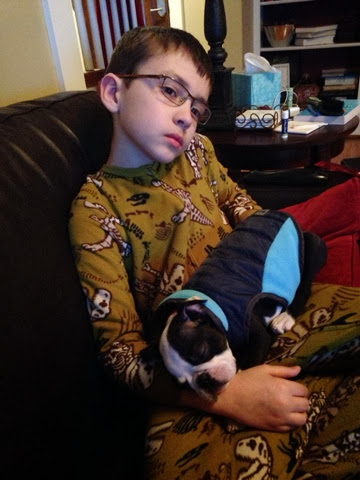 full disclosure: THIS is how I managed to write this post.
thanks, anth.
wish us, or Rocky, luck!
someone is going to need it. . .
♥ posted by momma savvy at 7:33 PM No comments:

a lesson in democracy: puppy naming

for years, we told the boys that they could have a dog if we lived closer to work.
we moved last summer.
and now find ourselves living closer to work.
the boys reminded us we have been overdue on a certain promise.
we considered the current state of our lives. . .
the boys have been potty trained and sleeping through the night for years.
why embrace this sense of stability?
so. . .
we are getting a puppy.
more specifically, we are bringing home a puppy this friday.
we are pretty darn excited.
not surprisingly, one of the biggest topics floating around the Savvy house has been "what shall we name the puppy?"
in an effort not to make this a boring conversation, all four of us wanted/liked different names.
even different kinds of names.
this was becoming problematic.
until, of course, bernie pulled out his BA in Political Science and guided us through a multi-layered voting process.
at the dinner table.
here's what that looked like. . .
ROUND 1:
everyone put forward their suggestions for names.
bernie wrote a master list of said names.
here it is: 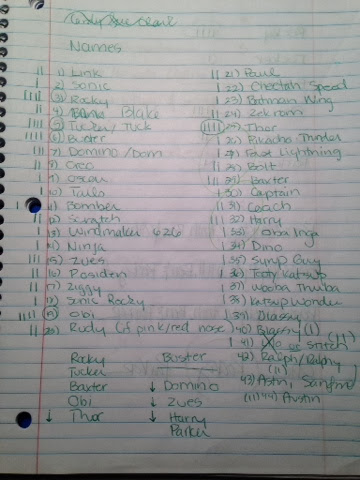 in case you can't read the awesome green ink we used for this process, here are some highlights:
bernie and I suggested some typical names: Tucker, Parker, Oscar, Obi
"Windmaker 626" - Ben
"Rudy, but only if he has a pink or red nose" - Ben
"Sonic, Link, Tails" - Anth
"Ketchup Wonder" - Ben
"Paul" - i have no idea.
"Hairy Potter" - Anth
"Syrup Guy" - Ben
"Astin/Sanford" - it appears that Bernie got bored around #43
ROUND 2
after we all felt that we had added our potential names to the list, Bernie read through each name and we voted if it was one we would seriously consider.
those are the tally marks on the long name list.
shockingly, not many of the names received more than one vote. . .
ROUND 3
we moved forward with the ones that had 3 or 4 votes.
bernie made ballots: 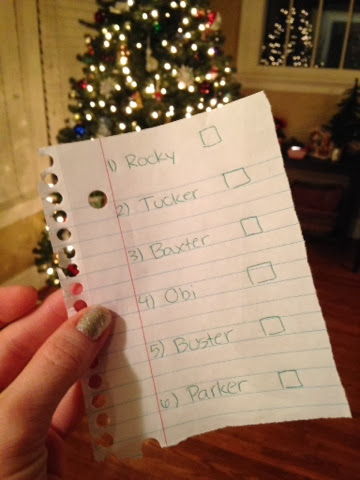 of course, before i could properly cast my votes, i had to test out the names i was considering: 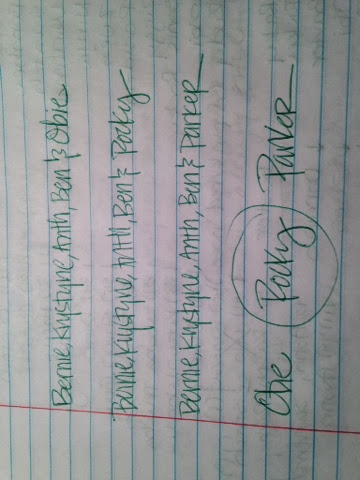 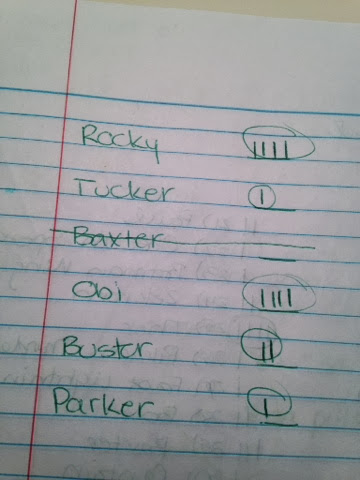 ROUND 4:
by a final vote of hands, we landed on Rocky.
now, i imagine some people will think this little pup of ours is named after a certain boxer.
not true.
rocky was actually anthony's suggestion.
becuase he has a teddy bear named Rocky.
it was given to him when he was just days old by a friend of the family, Ankita Rakhe, and her mom.
their name isn't actually pronounced "rocky," but...details.
so, almost 8 years later, we have a dog, named after a bear, named after a friend in Northern California.
even better?
benny panicked about a week after we selected the name.
he realized that, because of a mark on the dog's back, he really wanted to call him Bolt.
which, as you can see, was not even on the final ballot.
we all compromised and agreed that our new family member could be Rocky B. Savarese.
forever making him seem like he was named after Rocky Balboa.
so, friends, meet our not-like-the-boxer Boston Terrier, Rocky: 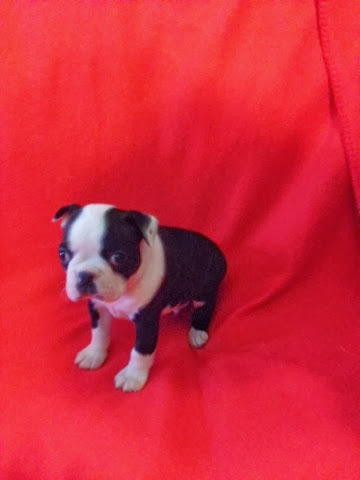 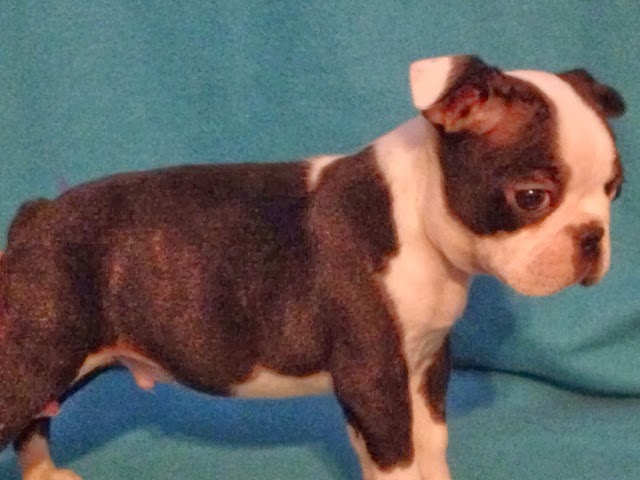 8 weeks
i'm certain there will be more posts to come as we all learn to take care of him together. . .
♥ posted by momma savvy at 6:36 PM 3 comments: