today, i made the mistake of trying to rationalize with my toddler that he is, in fact, human.
this resulted in a pint-sized person with chubby little crossed arms yelling,
“You NO call me people, mama! I NOT a person!”
we are agreeing to disagree on this one.
(7.2.10)
♥ posted by momma savvy at 9:28 PM No comments:

oh my gosh, mom!
i have been waiting to have this my WHOLE LIFE!
thank you!


-anth, gratefully confused by the cotton candy i brought home from a Student Life event today
♥ posted by momma savvy at 8:43 PM No comments:

compliments of Yo Gabba Gabba, the boys occassionally
break out into a "dance" they call "getting the sillies out"
♥ posted by momma savvy at 11:30 AM No comments:

Email ThisBlogThis!Share to TwitterShare to FacebookShare to Pinterest
Labels: anth and ben, video

something close to sweetness

benny was in a cuddly mood tonight after reading a few books for bedtime.
he was quietly playing with my hair while we rocked in his chair.
at one point, he leaned back to look at me and said, “i lub you, momma,” then plopped his head back on my chest.
i was about to tell him that i loved him right back when he leaned up again
and whispered in my ear, “but yo haiw is SO messy.”
♥ posted by momma savvy at 8:44 PM No comments: 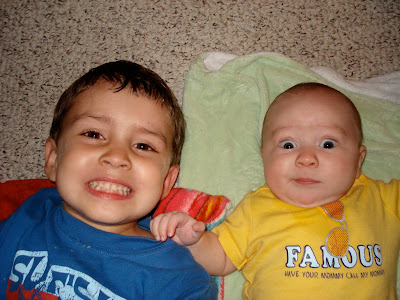 this photo is clearly older, but it is truly one of my all-time favorites of the boys together.
what, exactly, does ben's expression mean?
more importantly, what could have possibly made him make it?
♥ posted by momma savvy at 4:31 PM No comments:

-benny, watching a video of himself on my phone
♥ posted by momma savvy at 7:56 PM No comments:

Fettuccine Alfredo- it's like mac and cheese for grown ups.

- anth, regarding his pre-school lunch menu
♥ posted by momma savvy at 4:48 PM No comments:

i was sitting on the floor with the boys getting them into their jammies after bathtime.
we were having an i-love-you-more contest. (wholesome, i know.)
anth touched the top of my head and declared, “i love you all the way up to here!”
then he paused for a moment, visibly in thought.
“i guess that means all you have to do is stand up and i’ll love you even more.”
anth stands up, pulls up his jammie bottoms, and looks back at me over his shoulder,
“gosh, i’m smart.”
♥ posted by momma savvy at 8:59 PM No comments:

- benny, wearing only a shirt, handing me his diaper.
charming. as always.
♥ posted by momma savvy at 2:27 PM No comments: 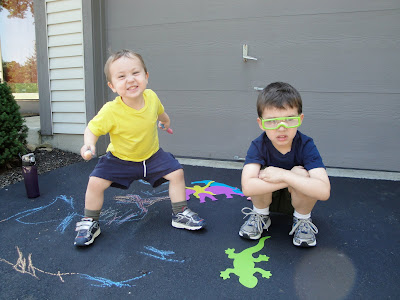 benny was thrilled by the 3D chalk-art fun.
anth was notably less impressed....
♥ posted by momma savvy at 5:05 PM No comments:

not quite there yet

at work yesterday, a colleague shared a “This I Believe” segment from NPR that i found particularly touching.
it included 30 “i believe…” statements generated by a 5-year-old.
a, in my opinion, extremely centered 5-year-old.
(http://www.npr.org/templates/story/story.php?storyId=99478226)
in my brilliance, i came home and asked Anth if he could share the things he believes.
i thought it would be a wonderful keepsake.
so i grabbed the pen-on-a-lanyard that was sitting on the counter and a notebook and sat down with him.
this is what he offered…
1. i believe that monsters are real… even though i know they aren’t.
2. i believe that daddies are strong and think a lot
(anth pauses. general look of disinterest in mommy’s project, followed by flash of inspiration. takes pen out of my hand, and puts the lanyard around my neck.)
3. i believe you should wear this pen, mom…so that you can write down whatever your boss tells you to.
(end scene)
…perhaps we’ll try this again at 6.
♥ posted by momma savvy at 10:46 PM No comments:

when i grow up

( benny is applying my pressed powder to his cheek.)
♥ posted by momma savvy at 7:00 PM No comments:

ben asked me for a sippy of water.
per usual, i wandered off to the kitchen, got distracted, and forgot about the water.
as i rounded the corner back into the living room, i almost bumped into a defiant looking toddler, feet set apart, arms crossed.
head tilted down, eyes looking up, my sweet boy reminded me
“i WAITING at you, Momma!”
♥ posted by momma savvy at 8:31 PM No comments:

oh man! this stuff is really spicin' out my breath!

we are currently on the road home from Grandpa Savarese's. benny has ripped a twizzler into two pieces that he is using as one cell phone per ear. the "conversation" on his end?


"no, no Bibby (Vivi is the little girl he dotes on in daycare)...I in duh car. I on my way to your house."
(hangs up twizzler/phone.) 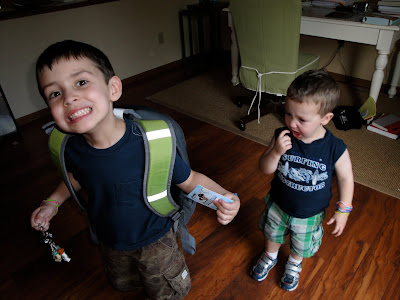 benny simply couldn't find the "i'm happy for you" place regarding his brother's
new backpack for kindergarten.
*note: all was well moments later when benny received his new
"big boy spinny toof-bwush"
♥ posted by momma savvy at 12:36 PM No comments:

setting: straightening upstairs, i overheard/quietly witnessed this...
Anth: oh! ben! i forgot! i have to show you the super special secret! come here... (walks toward bathroom)
Benny: otay (follows)
Anth: (climbs onto footstool in front of sink) okay ben, are you ready?
Benny: uh-huh!
Anth: we have a secret hole in the wall!
Benny: (captivated silence)
Anth: (with super-self-impressed look on his face...opens our medicine cabinet behind the sink)
Benny: (whispers) wow...da secwet
Anth: i know, isn't it cool? a hole in our own wall!

...we have since made 2 trips back to the cabinet to open it again for benny. it is, apparently, another way in to Narnia.
♥ posted by momma savvy at 8:12 PM No comments:

Email ThisBlogThis!Share to TwitterShare to FacebookShare to Pinterest
Labels: anth and ben, quote

yep, our pre-schooler prefers showers to baths.
apparently, for the acoustics.
♥ posted by momma savvy at 8:17 PM No comments:

we are trying to raise polite kids. "please" is a required word in our house if the boys want to have something. if the boys forget to say it, we give them the friendly tilt-my-head-toward-you-and-cup-my-ear-while-raising-the-eyebrows. benny sometimes misses this cue, so we give him a "puh..." and he fills in the "leez!"

benny really wanted a cookie tonight. when he's focused, he tends to get ahead of himself. "cookie, mama!"I responded with the requisite cupping the ear..."cookie, mama!"

so, i leaned over and whispered "puh..." He got up on his tiptoes, cupped his hands around my ears, and emphatically whispered "puh-COOKIE!"

why are you laughing, mom?

...not surprisingly, the boys are currently back on a Toy Story kick

...benny has an older Woody doll that he calls “big woody”


...this is because we recently got the boys little Lego Toy Story keychains


...benny refers to the keychain as “little woody”


...benny has also recently taken to playing with a bicycle bell that he calls his “ding-dong”


...take a moment to imagine how much the adults in the house have been entertained by their sibling rivalry as they lose, find and fight over these toys


...(except for when it happened at Target regarding a large character pillow)

...someone at Pixar is giggling.
♥ posted by momma savvy at 9:25 PM No comments:

Email ThisBlogThis!Share to TwitterShare to FacebookShare to Pinterest
Labels: anth and ben

"Hey, Mom. I think i figured out the difference between pre-school and kindergarten.
In pre-school, computers are for games.
In kindergarten, they’re for homework.


– our soon-to-be-kindergartener
♥ posted by momma savvy at 8:50 PM No comments:

benny has taken to going down the stairs step by step on his tush. today he missed the last step and came crashing down on his rear end. immediately in tears, he ran over for a “hug and a tiss.” i gave him a squeeze and leaned over and kissed his diapered tush.

benny immediately swiveled around, arms crossed, with a look of sheer disgust. pointing to his left butt cheek, “no Mommy, you tissed my WRONG butt.”

Email ThisBlogThis!Share to TwitterShare to FacebookShare to Pinterest
Labels: benny

ben gets one Oreo daily.
we are out.
this is problematic.
ben just grabbed my phone, and while typing, muttered under his breath, “Daddy, daddy. I lub you. Peez where are duh Oweos?” then handed the phone back to me and said, “there, Mommy” and walked away.

Benny: i have da hiccups, mommy.

hey Mom, I think the news is on next….so we can find out who got hurt today.

Cat Deeley! I love her!