so....here's the thing.
this blog is, by and large, dedicated to the things that my boys do that make me smile.
or giggle.
or guffaw.
depending.
mostly, because they are just good, old-fashioned, day-to-day interactions.
with a little bit of flair.


but, if i am painting an honest picture, it is not all hilarity ensuing in the savarese house.
while i do find the humor in their antics, i also find my heart making room for both pride and, for those who know me well, the general sappiness that is always there under the sarcasm.


so, if you are only here for the general mocking of small children, then:
1. you should probably take a minute to reflect on that, and
2. this post probably isn't for you.


so....last week.
right.
the backstory...
(which, PS, i have plans to make an "Our Story" page kind of like the family photos page...with words - because i feel like i am always drifting into some sort of backstory. leave a comment if that would be helpful/fun/something other than self-indulgent.)
but back to the background...
my husband and i work full-time.
he, bless his heart, has been going back to school for his second masters for the last two years.
it is a working professional's MBA program and it requires that he be in class multiple nights a week.
because we are academic nerds, he tends to study relatively late.
we both kind of have a thing for good grades.
and that whole learning the material part, too.
and, for doing an assignment, or task, well.


so, last Tuesday, i received the following photo, via text, from my sweet husband.
because he had realized he had taken anth's homework assignment with him when he dropped him off at school in the morning.
and we were likely to miss each other in the chaos of the day.
the assignment itself was simple.
draw a map representing the shapes of the objects in your room. 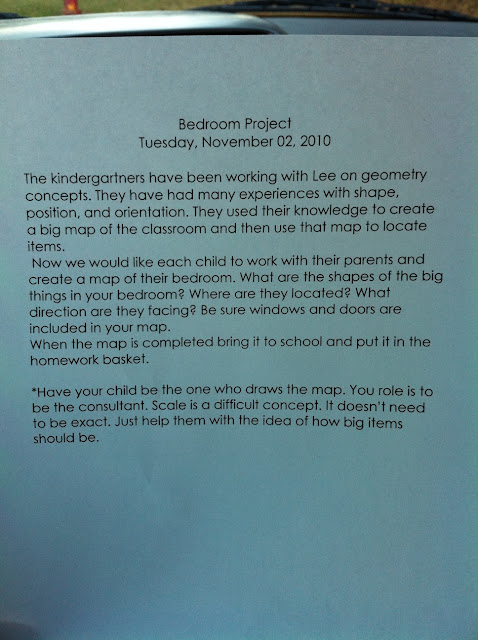 fair enough.
because the assignment wasn't due the next day, we ended up working on it later in the week.
(and by we, i mean anth and bern worked on the majority of it.)
i assumed anthony would spend a bit of time drawing some rectangles representing his bed, dresser, shelfs, etc...
instead, anth and his dad spent upwards of an hour and a half producing this: 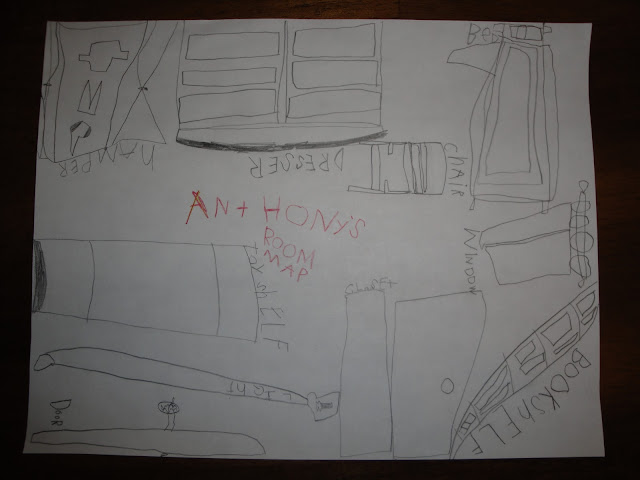 and, thus, i had one of those moments.
a Proud Mommy Moment.
sitting there, watching bernie guide anth through the process.
it hit me.
anthony LOVES doing homework.
seriously.
at night, he asks to work on writing his numbers and letters, or reading, before he goes to bed.
sometimes he forgoes the usual 10 pages of Harry Potter a night for the sake of more practice of his penmanship.
my sweet boy loves to learn.
merely for the sake of learning.
and he has a good work ethic.
i guess this is not all that surprising.
but, still, it is encouraging.
maybe anth would have been that kid regardless.
or maybe, just maybe, bern and i have translated a couple of our values into this little gem of a person.
being a parent is a big responsibility.
...and sometimes it's kind of nice to have even the littlest proof that you're doing something right.
♥ posted by momma savvy at 8:44 PM