you can take the girl out of california.
but, even after a decade of living in Ohio, you can't quite take all the california out of this girl.
especially when it comes to weather.
i still find a good thunder storm or display of lightning absolutely fascinating.
so, being in one of the many states being hit by the ice/other storm festivities of the last few days has been...special.
on one hand, i find the idea of driving on frozen water terrifying.
on the other, it's all really pretty and it makes me want to take pictures.
bernie lovingly told me, "you are such a californian," yesterday after i tromped around in front of our daycare taking pictures of ice-encased shrubs on my phone because i didn't have my camera handy.
i also took phone photos in front of the post office.
and then out on The Oval as i walked around campus.
but, i wanted my real camera.
and by real, i mean my old point and shoot, as i am still figuring out manual mode on the fun new camera.
it was dark by the time i got home, so the photos opps were limited.
this first one is low quality.
because it is through my window, for fear of falling on said camera.
(dear neighbors who i don't really know across the street...if you saw me taking photos in the direction of your home through my window last night, i promise i was operating with good intentions.)
this is the end of my driveway leading into our street.
the rest of our driveway is basically an 89 degree angle.
fun. 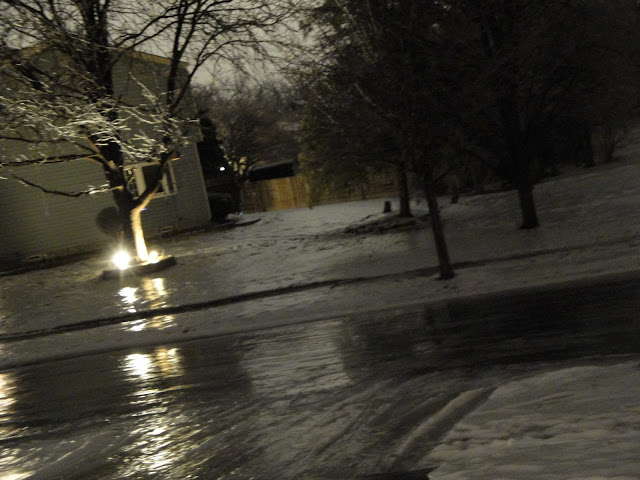 then bernie humored me and gave me a few minutes to wander around on our deck in the back and take these pictures of icicles before he ran out the door to go study.
(note: he quickly came back in the door to study at home after finding out every good coffee shop was closing at 8pm.) 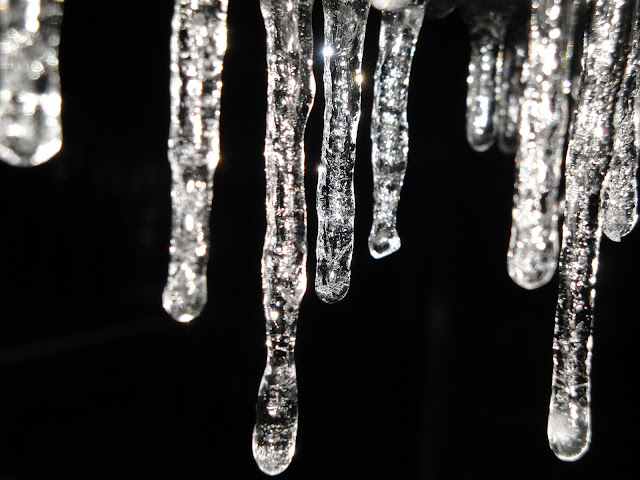 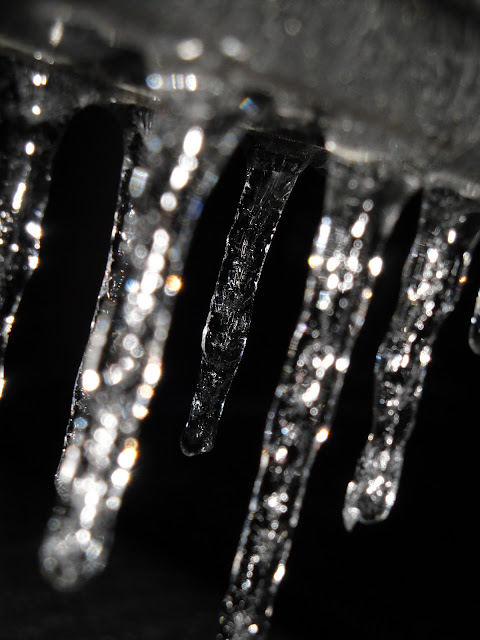 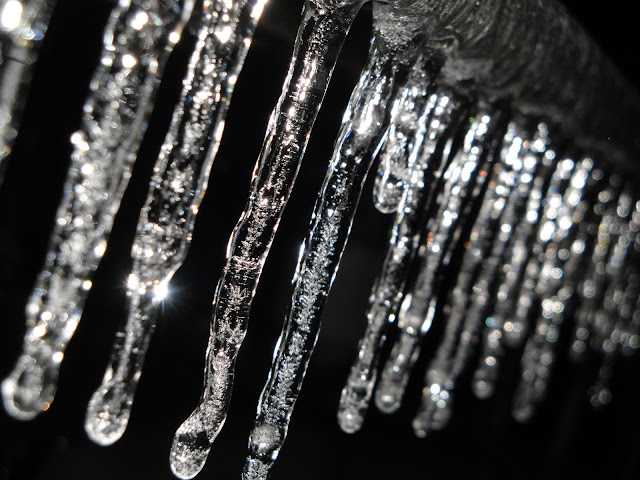 so, yes, i'm a nerd and like to take pictures of these things.
neither of these facts should surprise most folks.
but...i was going somewhere with all of this.
promise.
anth's teachers decided to capitalize on the weather and make it a learning experience.
on monday, they sent home a week-long project.
on monday night, anth was to watch the news and take note of what weather was being predicted.
then, over the week, he was asked to write/draw/note his experiences, thoughts, observations of the weather in his journal.
cute.
so far, the first two entries seemed like they were worth sharing widely.
the first one was the one about the forecast.
***important note: anthony's teachers have asked that the parents allow the kids to sound out their words and not correct their spelling for them.
i clearly am willing to poke fun at much of the day to day portions of my kids' lives.
anth LOVES homework.
mom and dad love that anth loves homework.
so homework is sacred.
make fun of his spelling and we have issues.
ok, protective mommy PSA over.
the second included his prediction of what an ice storm would look like.
seeing it made me think that maybe my verbalizations regarding the coming storm were, in fact, quite "californian."
apparently my  poor little man thought that an ice storm entailed people running around in the streets trying to avoid giant human-sized shards of ice.
♥ posted by momma savvy at 10:51 PM