last night, bern and i took the boys to the first ever Buckeye Kickoff.
the event started with the premiere of the "Ohio Dog," a hot dog covered in mashed potatoes, scallions, cheese, corn, bacon, and i'm sure a few other things i'm forgetting.
i, of course, loved it.
the boys, of course, requested "regular hot dogs."

the event was designed primarily for first years, but all were welcome, to kick off the football season and teach the old, and new, traditional cheers for the games. 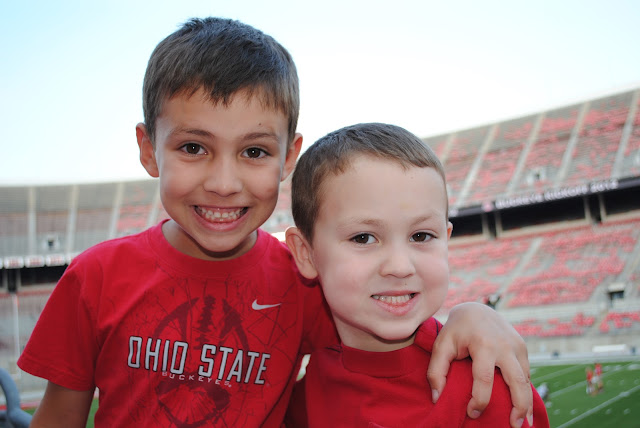 it was benny's first time in the Ohio Stadium. 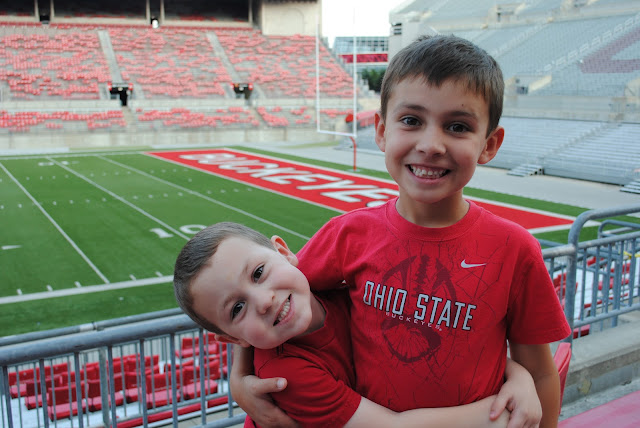 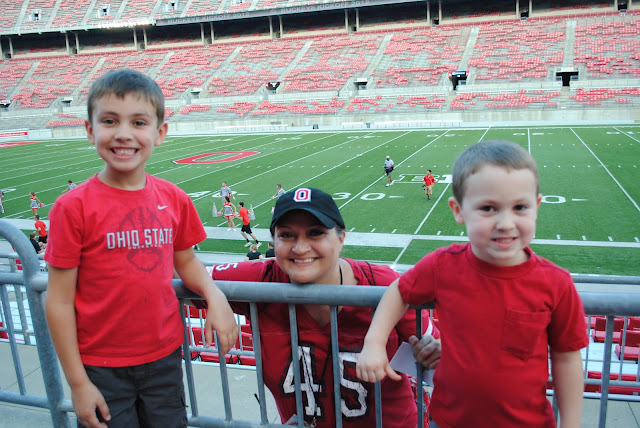 the boys took a minute to pose with my supervisor, Barb.
she was busy herding the RA staff for the evening. 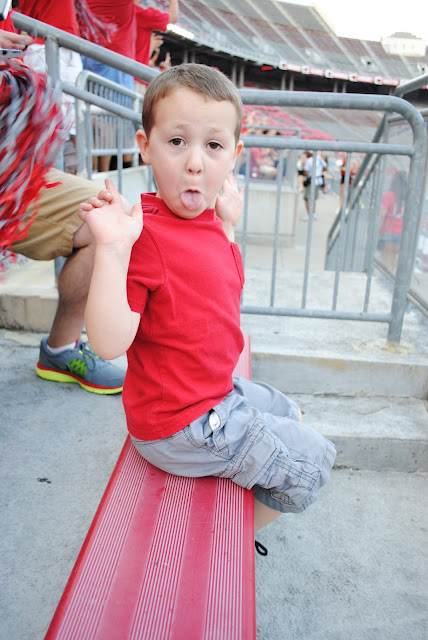 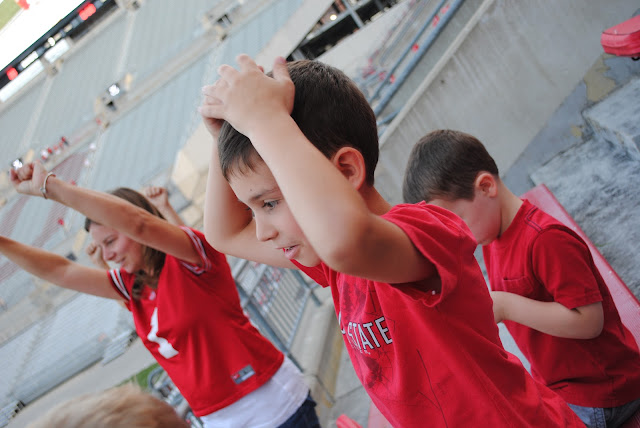 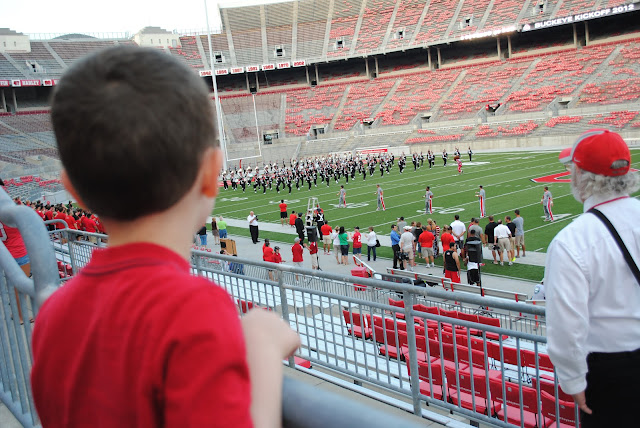 ben was, per usual, all over the place.
he was running up the bleachers, crawling under the bleachers, dancing, etc.
until. . .
The Best Damn Band In The Land came out on the field.
he literally stood there in awe. 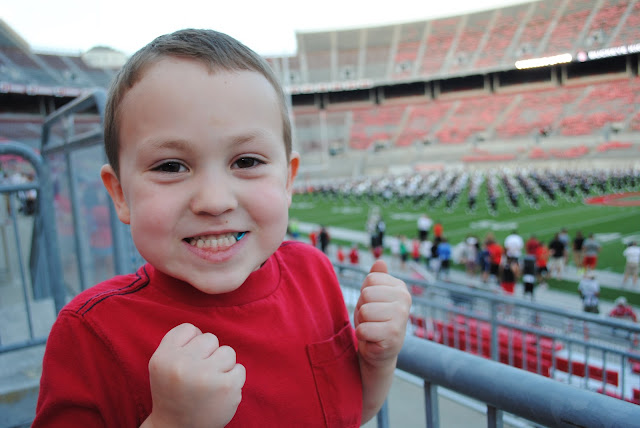 then they started to march across the field to do Script Ohio.
which he had never seen in person.
suffice it to say, the kid was excited.
(bern has clearly trained him well.) 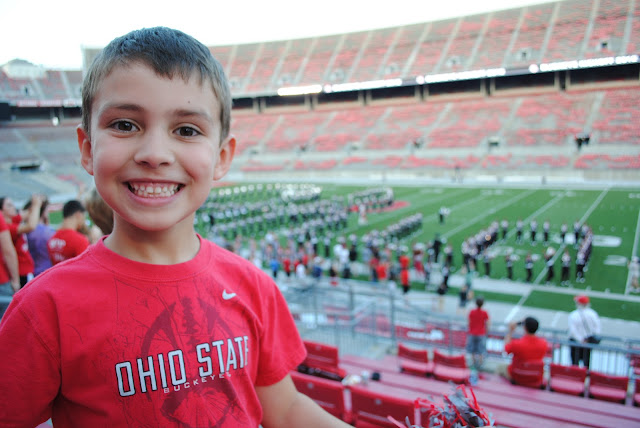 anth enjoyed it, too. 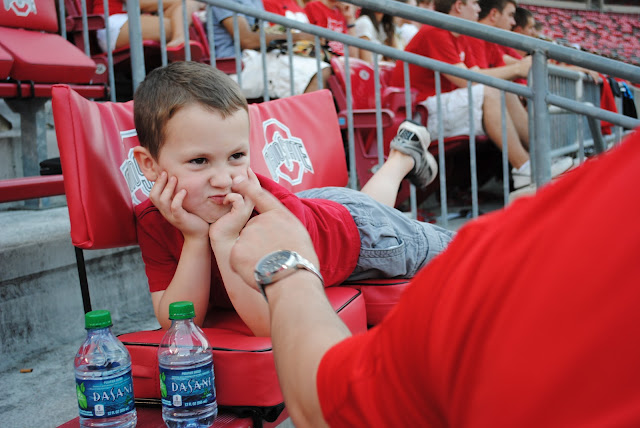 then the band left the field and benny was back to his usual antics.
this time, he was exploring the variety of ways to make use of the "squishy seats." 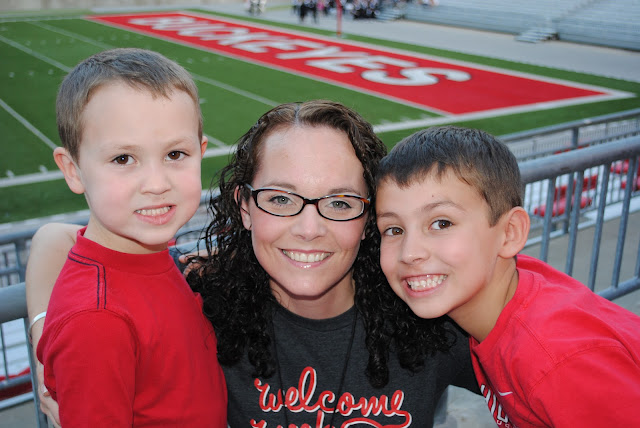 a rare shot of me and my Savvy boys.
(i tend to hide out behind the camera whenever possible. . .) 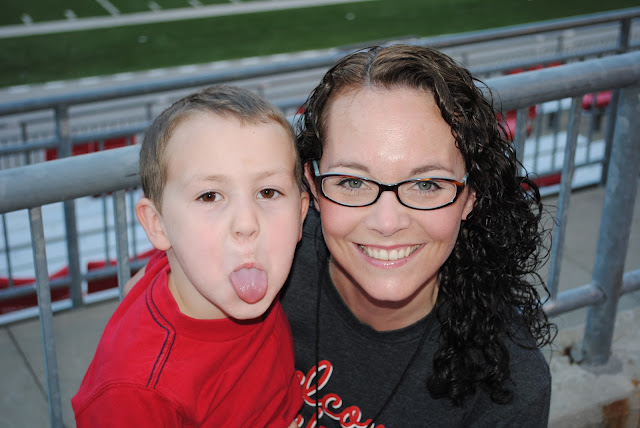 ben, adding his usual flair to a photo opps.
heaven forbid we have a cute picture  of the two of us.
perhaps not the one i will be using for this year's holiday card. 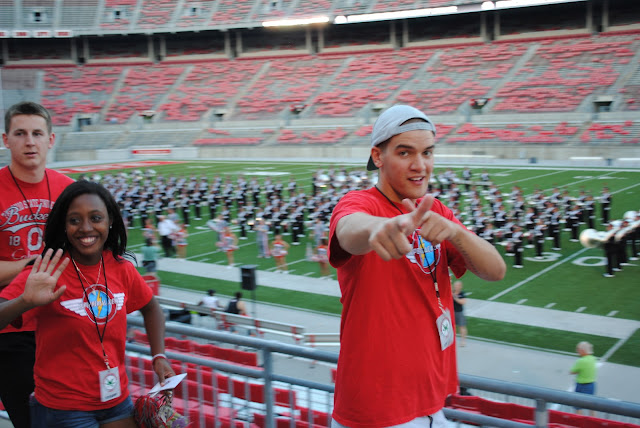 then, it was time for the RAs to head out to the field for a fun new tradition. . . 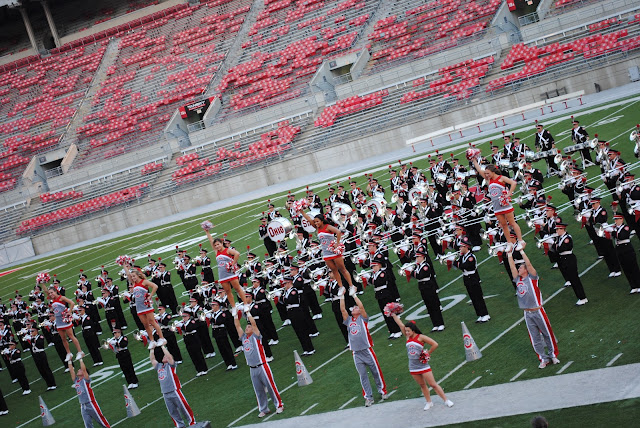 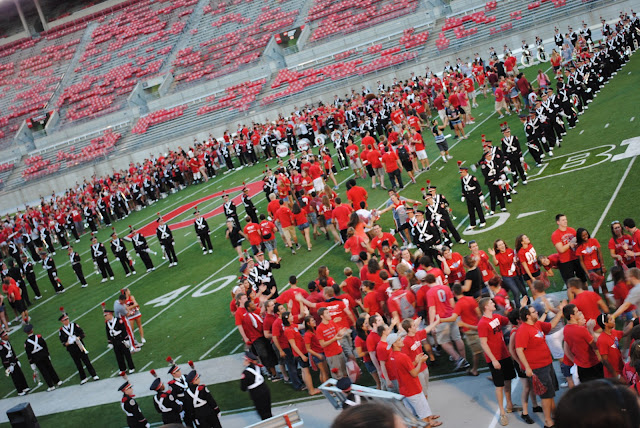 the RAs created a spirit tunnel for all of the students in attendance to make their way through on the way into the photo of the Ohio State first year class. ﻿ 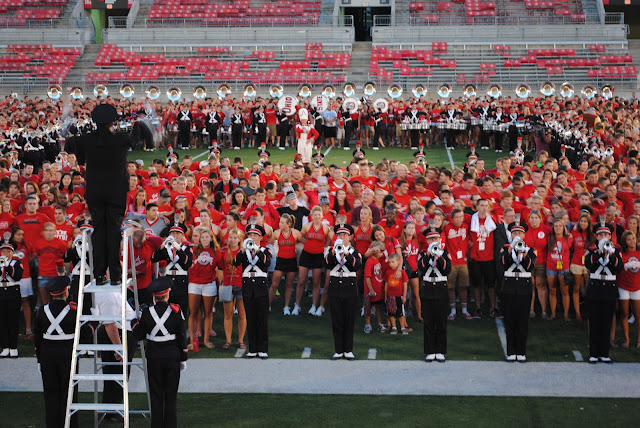 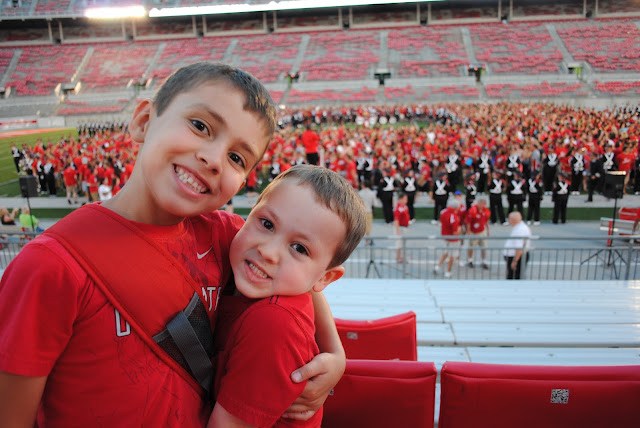 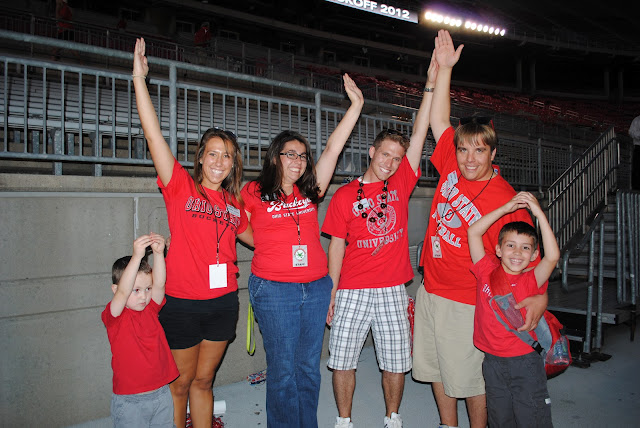 we ran into some of our new Higher Education and Student Affairs grads, Megan, Renata, Dan & Timmy who made a modified O-H-I-O with the boys. 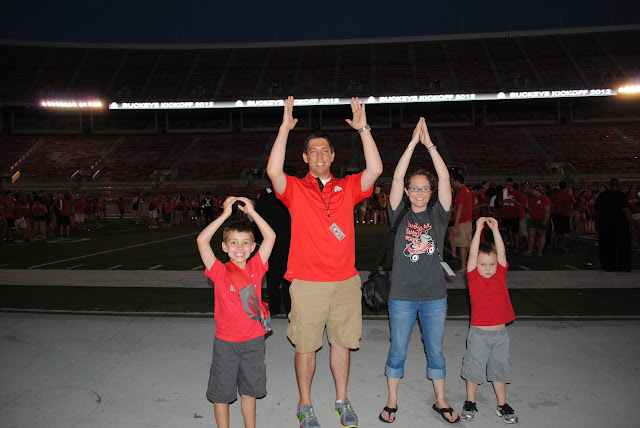 i am not entirely certain that we are spelling O-H-I-O, so much as O, Hii. . .
we are simply trying to be friendly. 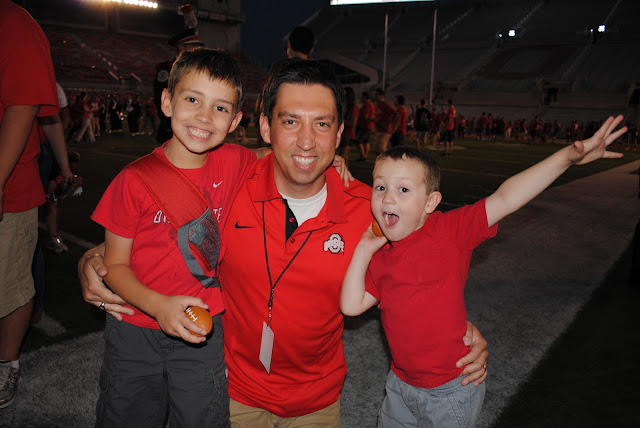 again.
ben and his flair. 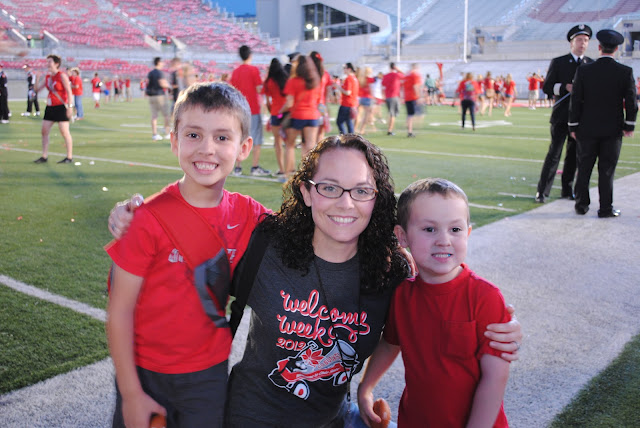 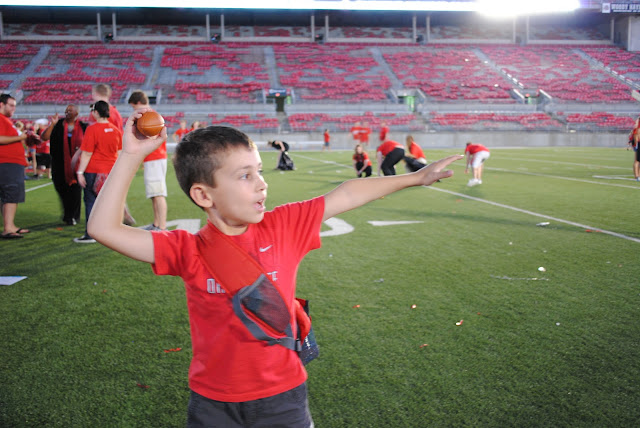 anth REALLY wanted me to get a shot of him on the field.
this was his pose of choice.
precious. 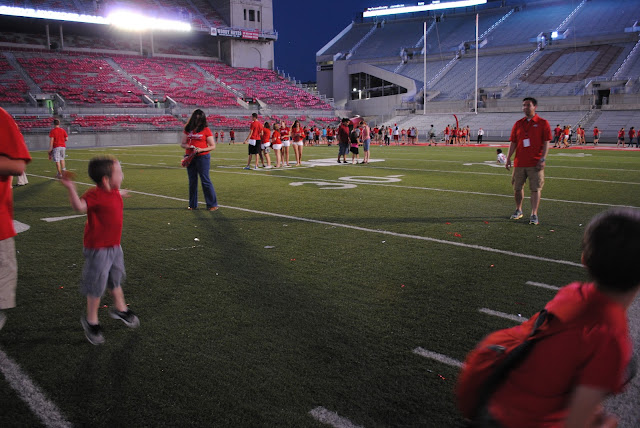 a little came of catch in the 'Shoe. 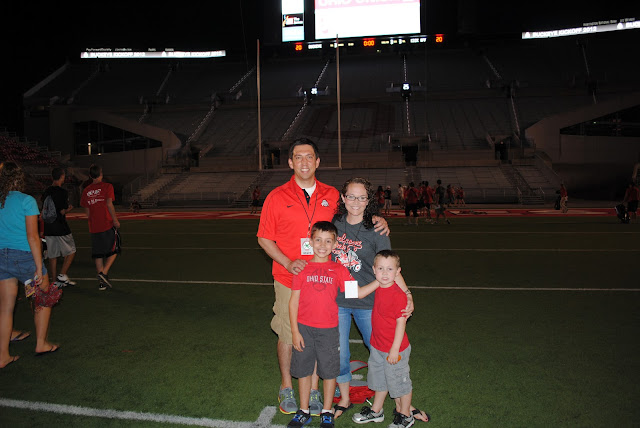 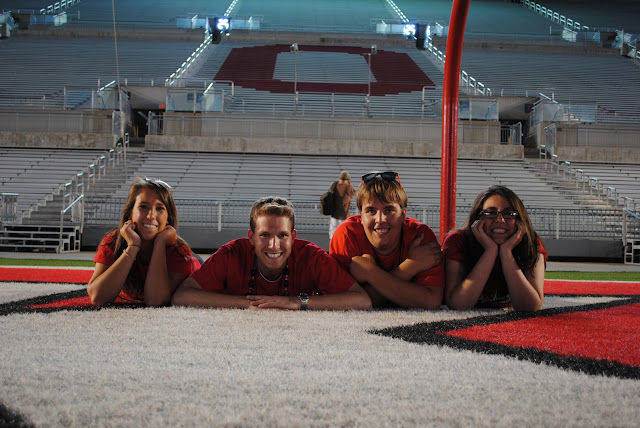 and more pics of a few of our wonderful Assistant Hall Directors.
who were just as excited as the first years, if not more so, to be down on the field. 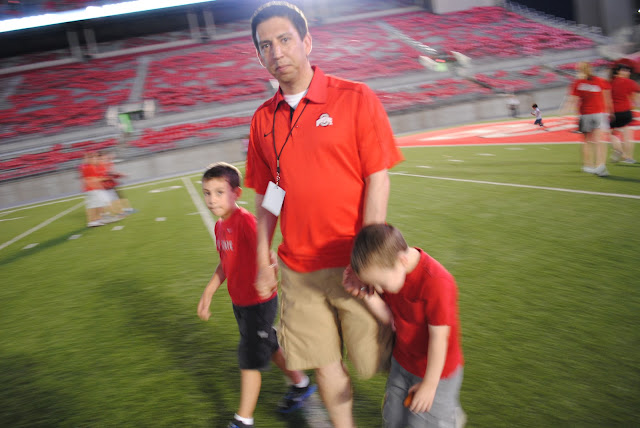 by this point, ben was pretty much tuckered out.
until he spotted President Gee. . . 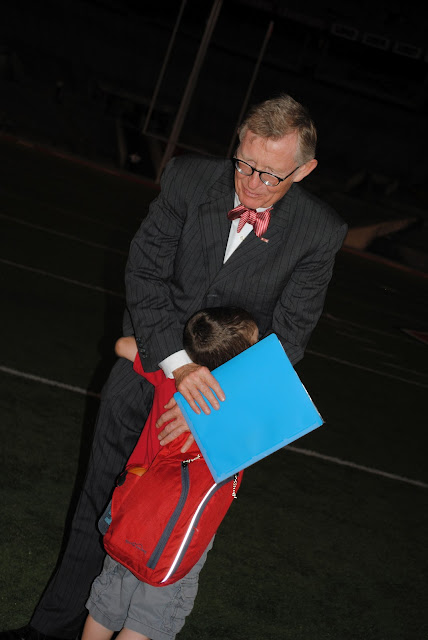 . . . and made a mad dash across the field, yelling "President Gee!," to give him a hug.
now, recently, ben has taken to hugging people at calf level.
anyone who has received a hug at this level knows that it tends to mess with your center of gravity.
thus, you will not be surprised to know that the thought in my mind was not, "hooray!"
instead, i was thinking,
"dear benjamin,
pretty please do not tackle our university president here on the football field.
thanks.
love,
mom"
all in about .432 seconds.

happily, benny did not, in fact, knock over any university officials.
(he also met the Director of the OSU Marching Band , Dr. Jon Waters.)
he did explain to Dr. Gee that his name was Ben and he was 4.
fair enough.

it was anth that surprised me.
in a rare moment for anth, he completely lost his usual composure.
and he did a full on happy dance, singing, "i met President Gee, i met President Gee!," while doing fist-pumps into the air and hopping back and forth.
(he has since Skyped with Grandma and Grandpa Welch in California and told them his story, and explained to his Grandpa Savarese that it has been his "dream to meet President Gee since pre-school, when his class sang him Happy Birthday via video.)
seeing as it's been half-a-lifetime's dream for him, he was pretty excited to see it come true.
as a result, President Gee was kind enough to pose for this photo. . . 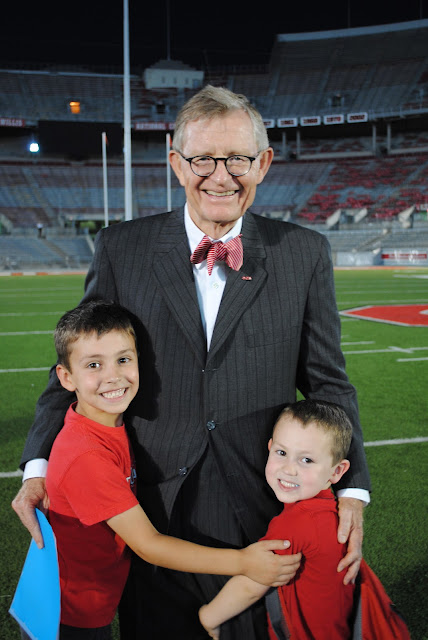