how hot i'm not

everyone once in a while, i start to write a post.
and then i get distracted and never come back.
this is one of those posts.
i just found it with the three images below loaded and no actual content.
oops.
so, here is what happened. . .

bern and i were on the couch watching The Voice one night.
and they showed a quick clip of Lou Diamond Phillips in the audience.
and i asked bern, "oh my goodness. how old is he now?"
bern lovingly responded, "ask Siri."
so, i did.
and i found out this: 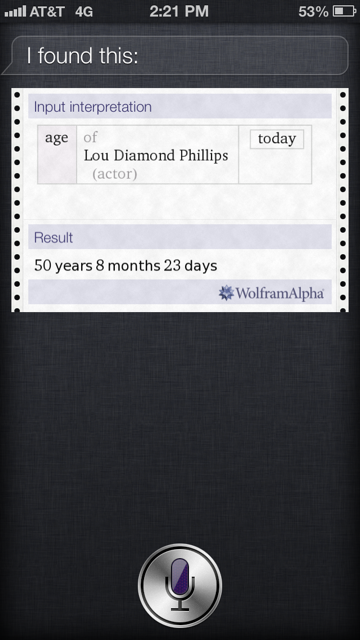 then, because i'm a punk, i asked siri, "how old is bernie savarese?"
not shockingly, bernie did not have the same level of fame as our friend lou.
So Siri, who responds verbally and in writing, asked out loud if she should search the web for Bernie.
this is what Siri asks when she has no idea what you're talking about.
(i see this response a lot. apparently i only ask ridiculous questions.) 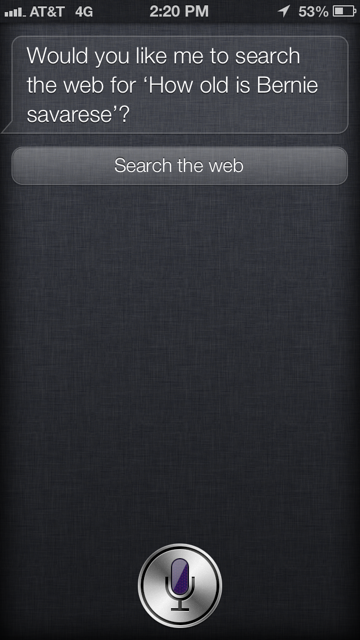 then, bernie wanted in on the action.
he paused The Voice, got out his phone and asked it, "how hot is Krystyne Savarese?"
(note: Siri can spell Savarese. Most humans can't)

again, because Siri responds verbally, the first two words we both heard were, "not exactly."

let me tell you.
i often see bernie laugh.
i do not often see bernie fall into a sidesplitting, tear-inducing round of laughter.
Siri telling him his wife was "not exactly" attractive was, apparently, a source of this kind of laughter.
he laughed so long, and so hard, that at some point, he just pulled one of the couch blankets up over his head.
apparently, he thought maybe he was being rude.
you know what was better?
sitting next to a large, shaking, slightly crying blanket on the couch.
at this point, i turned The Voice back on.
sometimes you have to let the laughter take its course.

lesson learned?
only ask Siri things you really want to know.
♥ posted by momma savvy at 11:38 AM