peer pressure? not my kid.

okay.
just to clarify.
i don't actually believe that i have implemented some unique parenting method different than the next person's that will make my thoughts somehow more relevant than the boys' peers in the future.
just to be clear.


but, as much as i know that there is a reality to the influence of others on my little men, my eldest gave me a little glimpse of hope last week.
you see, anth's sports camp has theme days on fridays.
July 15 was Harry Potter Day, in celebration of the release of the last of the movies.
(ugh. still haven't seen it. which is sad. but at least i'm still looking forward to it?) 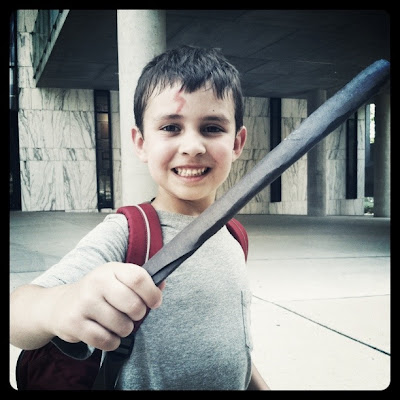 here is anth showing off the wand he made at Camp Recky.
nope, no feather inside.
also - the Crayola Washable Markers they used on his face?
easily wash off of cloth, not flesh.
oops.


anyway, in the spirit of all things Potter, the camp counselors brewed up a batch of butterbeer to serve to the kids.
they told the kids the ingredients, which according to anth, involved things such as "butter, honey, and beer."
anth, follower-of-all-rules, vehemently refused to drink the concoction.
becuase, yes, it had beer in it.
and beer is not for kids.
anth relayed this story back to us that evening. bern heard it first.
he sent anth to me, and anth began by saying that daddy said he could have two stickers tonight.

sidenote:
the boys have suddenly started to be a raging hot mess about eating their dinners.
now, they've always been. . . easily distracted.
but it's getting worse.
so we reverted to the logical option for parenting technique on this one.
stickers.
low and behold, the kids will eat whatever we serve them to get one.
(kelly and i actually found a cute little set of Peanuts stickers that go along a little path.)
anyway, they typically get one sticker for each day they eat well.
it's going to take them a while to complete their little sticker path, so bern and i have yet to figure out what exactly the reward will be.
right now the boys are gunning for Captain America shields from Target.
if they will eat their veggies in order to get a seven dollar frisbee with a star and handle on it, i'm all for it.

back to the beer.
anth started it out his story by saying "one of my favorite counselors tried to sneak me beer today."
you can imagine my initial thoughts on this.
i asked for a bit more information.
anth explained that he articulated the fact that beer is not for kids to the camp counselor.
(my words. not his)
the camp counselor clearly tried to explain to him that it was, in fact, root beer he was being offered.
now, in the savvy home, the kids don't get soda.
ever.
so anth really wouldn't know that root beer is not equivalent to an adult beverage.
anth again explained that his parents don't let him drink beer.
according to anth, the counselor said he could just "sneak it" while he was at camp and it would be okay.
now, anth has a knack for adding some flair to stories, so this may not have been exactly what the counselor said.
i imagine he was trying to convince anth to live a little and enjoy the offering.
at least that's what i'm hoping.
anth stood his sweet little ground and refused to drink the forbidden substance.


i did ask him if the other kids drank the butter beer.
he said that, yes, pretty much all of them did.
(which makes me wonder what exactly he thought was going on around him if he believed his sports campers were all being given "adult beverages" by their counselors.)

now, bless his sweet heart, i appreciate that the rules we have taught him are portable.
but i am also a bit sad that the kid didn't get to have a glass of stinking butterbeer.
becuase it's really kind of cute that they did that for the kids.
but, i'm also quite proud of my little man.
i declared it a three sticker day.
♥ posted by momma savvy at 9:14 PM