you have heard about our new friend Ernie.
the elf.
the boys have quickly adapted to having him in our house, running around each morning to find him, and reminding each other that Ernie is watching when one gets a little squirrely.
basically, life with Ernie has been good.


until this weekend.
one of the main, and only, rules regarding Ernie (as detailed in the book that appeared along with him) is that you cannot touch him.
if you do, no more magic.
the boys have abided by this rule completely.


on Saturday, we came home a bit after their usual bedtime from a holiday party.
we were in a flurry to get into the house, and in our rush to get in the door, ernie may or may not have been jostled from his resting spot on the edge of our kitchen counter.
and by jostled, i mean pushed off of the edge to land flat on his face on the floor.
no one is sure exactly who did it, but the boys immediately blamed daddy.
for, essentially, ruining christmas.
all at once, many things started to happen.
anth started to rationalize the fact that, "well, at least i have already told him the big stuff i want from Santa."
(anth decided the boys should share one wish per night, as too not be perceived as greedy.)
ben realized he had only told him small things, like stuffed Angry Birds, and started to panic.
and daddy, trying to calm the situation, ended up scooping up Ernie with a spatula and mixing spoon, so as to not really touch him.
bern put him back on the counter and we left him there with the hopes that all would be well in the morning. . . 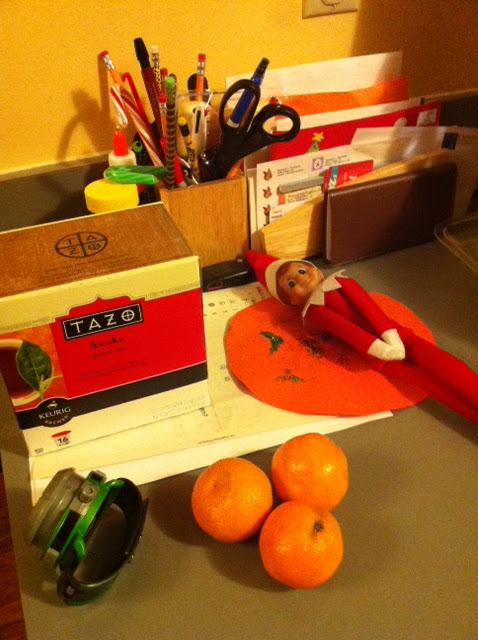 if my children had better rested parents, all probably would have been better in the morning.
unfortunately, they don't.
and poor Ernie was in the same place on the counter on Sunday morning.
this is when the boys knew they were really in trouble when it came to gifts.
anth was able to stay impressively rational during this, and he decided we should consult with the recent Elf on a Shelf made-for-TV movie.
in it, the older brother touches the elf and causes him to lose his magic.
the boy writes an apology letter to Santa, Chippy the Elf returns, and all is well again in the world.
the boys conferred and decided bern would need to write an apology to Santa.
it was also decided that, it being modern times, Santa would take email.
bern sent the email, and then we scooped up the boys and took them to Target.
fortunately, when we came home, Ernie was alive and well and sitting up in a new fun spot.
crisis averted.
. . . until this morning.
the boys found ernie happily perched on a shelf in the downstairs bathroom. 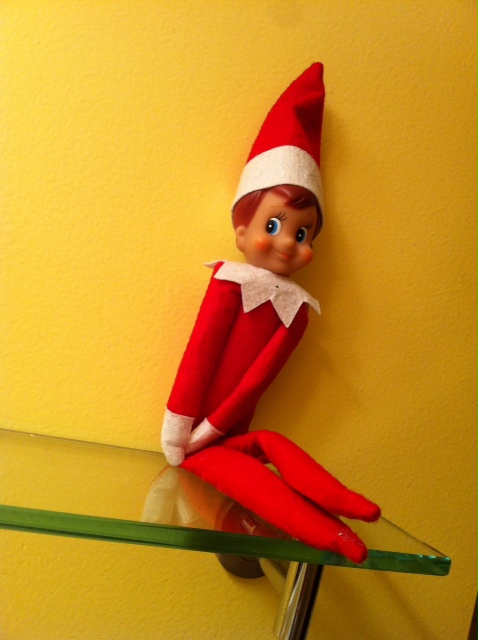 looking just as creepy (as i find him) as usual.
we were all rushing around doing the last minute pouring of coffee, application of large puffy jacket to small wiggly child, etc.
bern went into the restroom to touch up his hair.
and then i heard a small little thud.
followed by, "not again daddy!"
i turned around to see part of ernie.
on the ground.
in the doorway of the restroom.
i then watched my sweet husband quietly walk into the kitchen, grab our over sized oven mitt, and pick up Ernie and put him back on his proper shelf before telling the boys that he would email Santa as soon as he got into the office.
Dear Santa,
we apologize for clogging your inbox.
Love,
The Savvy Family
♥ posted by momma savvy at 10:33 PM