recently, benny's classroom did a lesson plan on migration.
cute.
then the teachers proceeded to do what, to date, has consistently been my favorite pre-school classroom activity.
finish-the-sentence.
both anth and benny have finished many an epic sentence.

i have a lot of photos of these worksheets.
taking them is a process in and of itself.
why?
because i'm 5' 1"
(and a half.)
yes, i'm 5 feet, 1.5 inches tall.
i keep hoping for 5' 2"
considering i am starting to get closer to the age where i will start shrinking, rather than growing, i should probably throw in the towel on this ambition.
One might say it is not possible.
to One, i say, it's always good to reserve a little hope.
even for things that are ridiculous.
anyway.
the universe noticed i was short.
ever since then, i have had:
. . . the highest locker in jr. high AND high school
. . . the highest possible mailbox in the Mesa Court community center in undergrad
. . . the highest P.O. box at the post office
. . . a husband who eternally puts my coffee cups in the part of the cabinet i can't reach.
. . . and an odd predilection for whatever food is on the highest shelf at the grocery store.
so, i guess i should say thank you to all the kind souls who have helped me get these items down when i have asked.
or when you have caught me climbing the shelves in Target.
i don't even mind if you judged me, as long as i got the right Keurig cups.
which is silly.
because i can't reach the coffee cups at home anyway.

so,  placing things out of reach has consistently been one of life's little jokes.
this has also applied to almost every piece of childhood art hung in one of the boys' classrooms.
ever.
i encourage you to take a minute and, standing on your tippy toes, hold your phone as high in the air as possible.
then try to get it to focus long enough to take a picture.
to get the full effect, throw in a few running pre-schoolers.
all this to say, i have a lot of these pictures.
most of them are of rather poor quality.
sorry.
i can't help it.
the universe, seemingly, enjoys mocking short people.
or, perhaps just me.

what does all of this have to do with migration, again?
ah, yes.
. . . nothing.
but the photo below does.
benny was asked to share what he would bring along for the winter if he had to migrate. . . 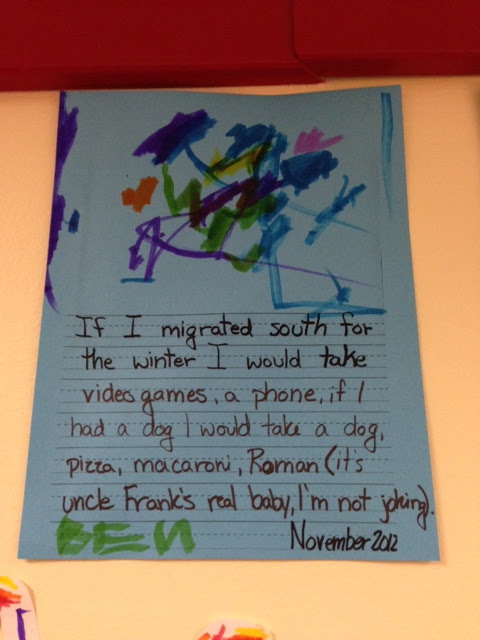