how to explain extinction to a 4-year-old...

oh.
hey.
so, apparently, i have a blog.
i seem to have forgotten that as of late.
really, the entire savvy family was taken down by the flu over the course of 10 days during december.
and then we ran off to visit my family in southern california for the holidays.
and then we came back an visited bern's family.
and now we are here again.
and i am really behind. ﻿
so, the next few posts will likely be photos from december.
(i promised my mom. deal.)

these are a bunch of photos from our visit to the Brea Tar Pits and the attached Page Museum.
benny has recently become obsessed with the Ice Age movies.
and, in turn, with saber-toothed tigers.
(or, as we learned, saber-toothed cats.)
and, he has been universally upset with both bernie and i for denying him the ability to go to the zoo and see a saber-tooth.
apparently, despite all the food and clothing and book reading and love, he is convinced that we are still kind of jerks.
so, we thought we should take him to a place that would better explain the details. . .

the Brea Tar Pits are a common field trip site for kids growing up in southern california.
in a terribly cliff-notes version description: back in the ice age, asphalt would heat up in the summer, rise to the surface of the ground, then get covered in leaves.
animals would wander in.
and not be able to wander back out.
predatory animals would try to attack them.
and also get stuck.
each year, their bones would melt back down into the "pit."
in the end, there are a giant mish-mash of the bones of extinct animals that have been being excavated for several decades.
these are on display at the Page Museum.
so, essentially, we took our youngest son to see the bones of his favorite, albeit long-dead, animal.
which was truly the best we could do.

here are some photos: 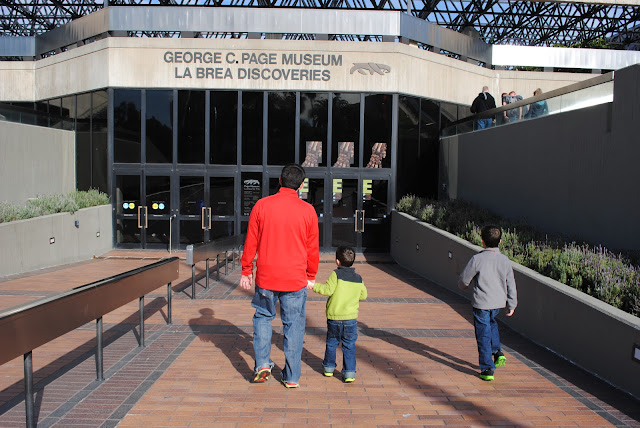 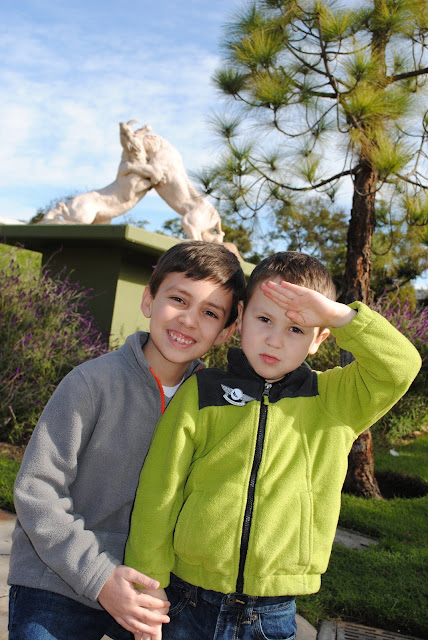 benny, seemingly saluting his fallen saber in the background. 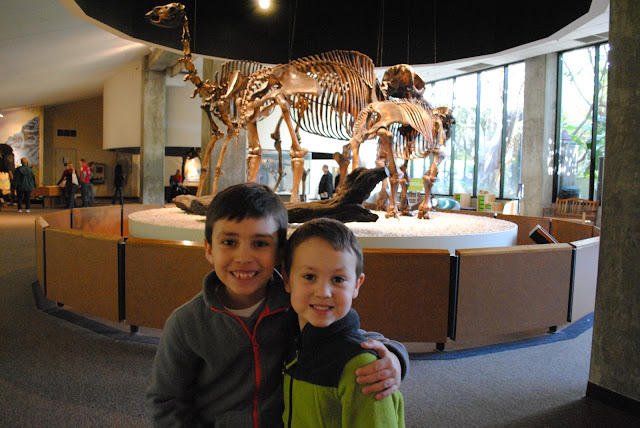 that's an extinct version of a camel back there. 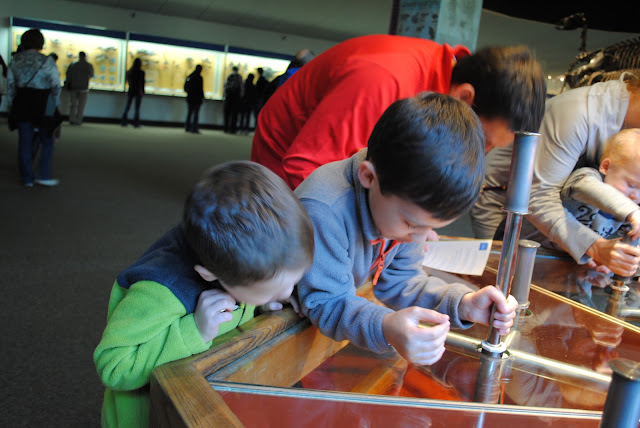 the boys loved this one.
it simulated the leg of a horse-sized animal, as well as a mammoth leg, and you get to try to pull it out of the tar. 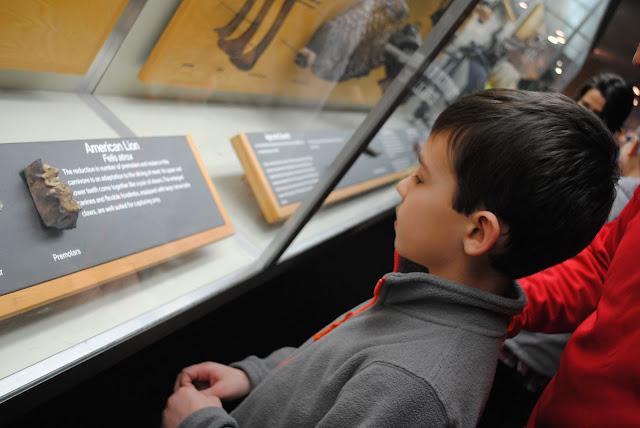 anth actually read all the signs that his poor little brother allowed him the time to.
i love this kid. 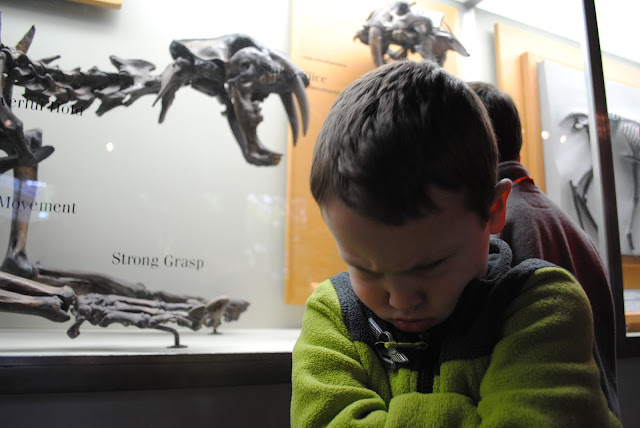 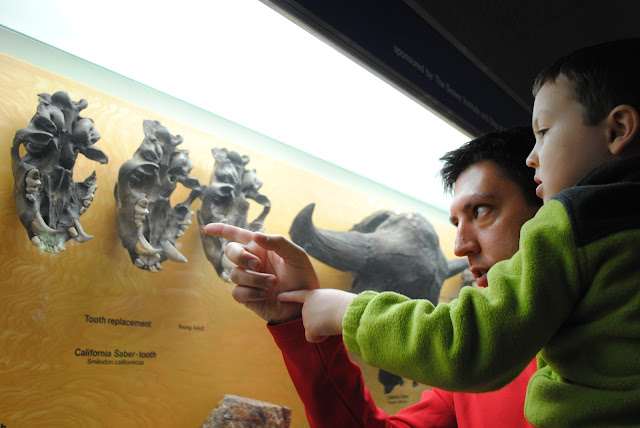 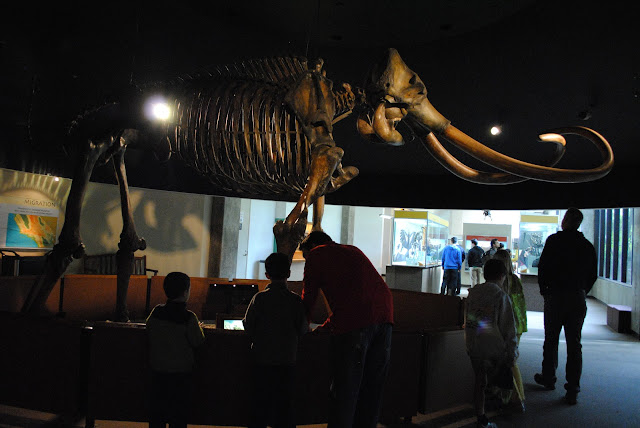 all the savvy boys.
and a mammoth.
he seems so much less intimidating as a friendly, animated guy named Manny in Ice Age. 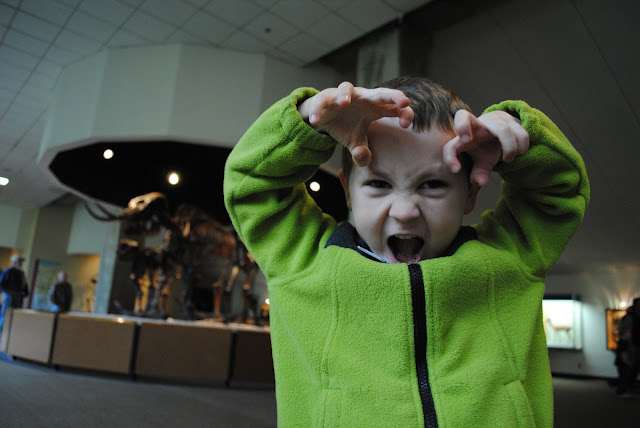 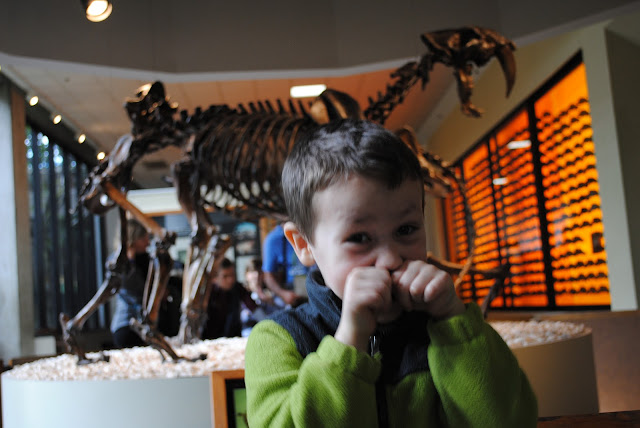 this was benny's genuine first reaction to seeing the saber-tooth behind him.
he stood there for a long time.
precious. 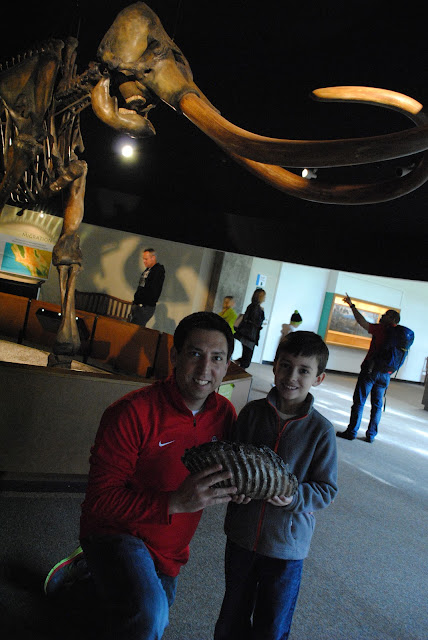 anth and bern holding a replica of a mammoth tooth.
apparently, they were not individual, but giant teeth with many ridges that would be replaced over time. 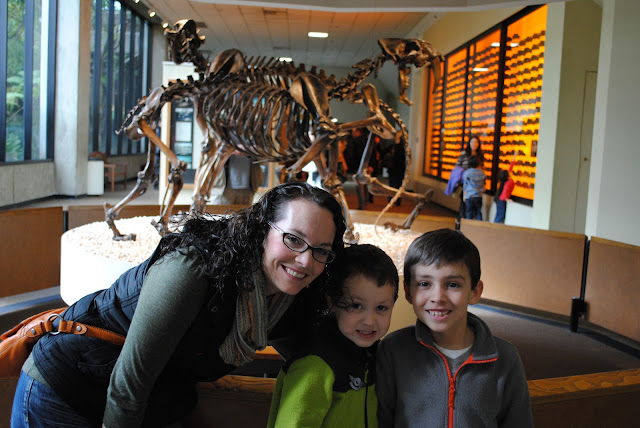 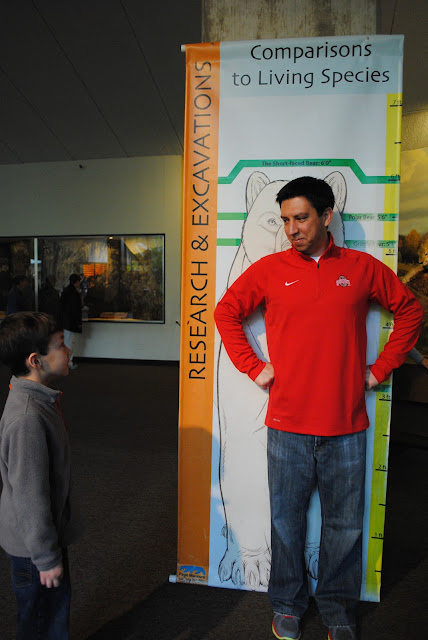 bernie comparing himself to a short-faced bear.
except there would be more legs.
and i wouldn't be stopping for a photo. 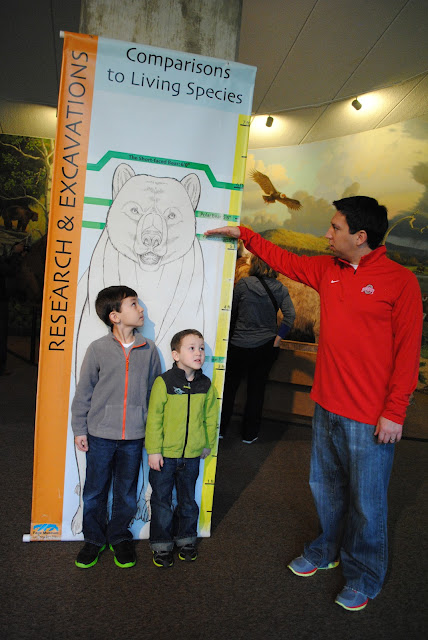 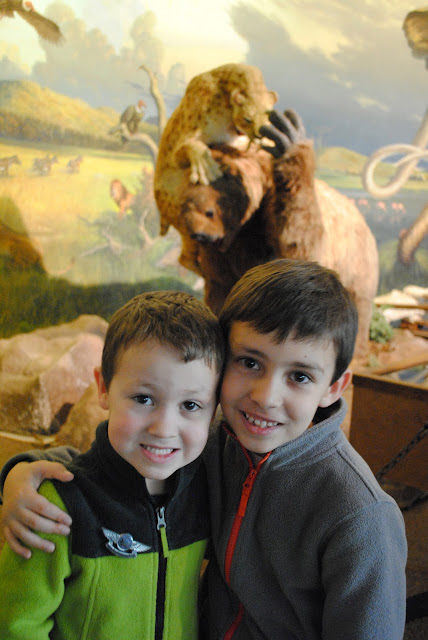 this might be my favorite photo from the entire day.
mainly because it is a pretty sweet photo of the boys.
except for the animated saber-mauling-a-sloth going on in the background.
oops. 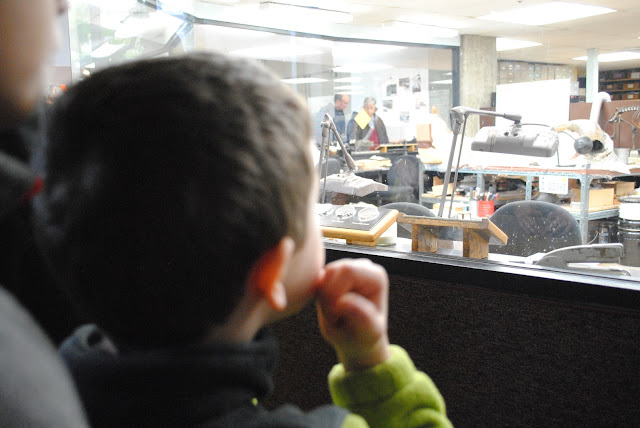 there is a lab on sight where you can watch volunteers clean bones from the dig sites.
ben has let us know he has found his future career. 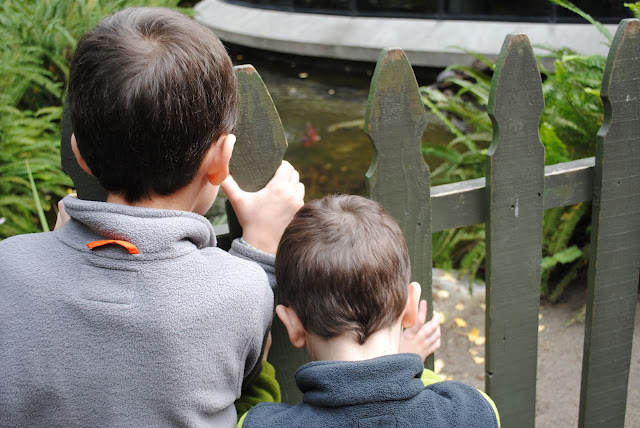 the boys stopped for like ten minutes in the courtyard in the middle of museum.
to look at COY.
which are overgrown goldfish. 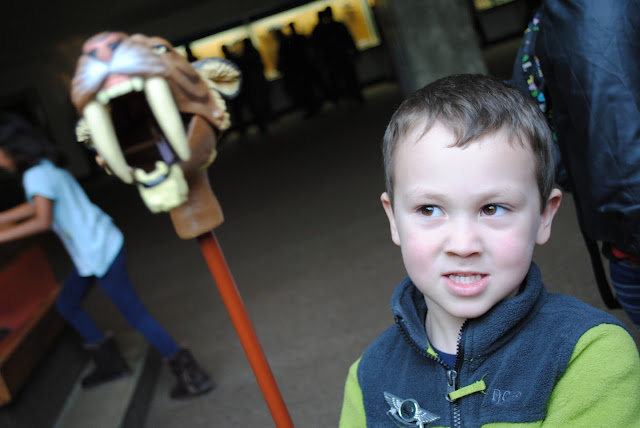 this is the souvenir benny picked at the shop.
it was probably a bad idea for us to allow him to get this.
'twas the source of much drama and a few unsafe car rides until we set some clear rules... 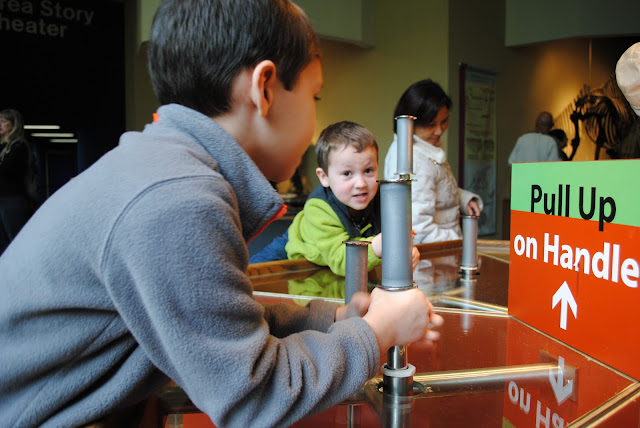 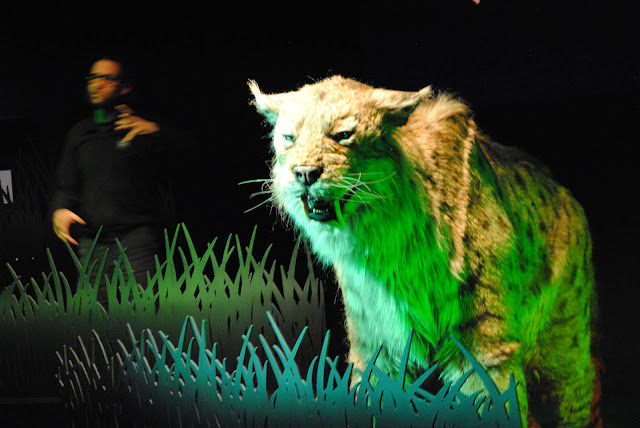 they had a tiny little black-box theatre that does a 15-minute show including a guy walking around in a saber-suit.
i thought benny was going to wet himself.
which would have been awkward, as he was sitting on bern's lap.
fortunately, he just froze in place until it was all over. 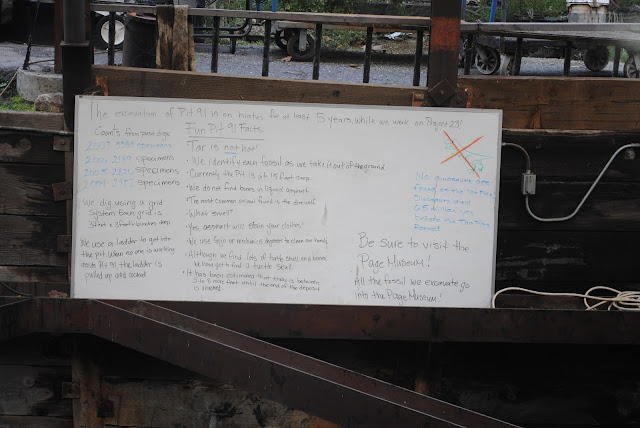 some fun facts on a sign.
that you can't really read.
making them not very fun at all.
so, i guess, these are just some facts. 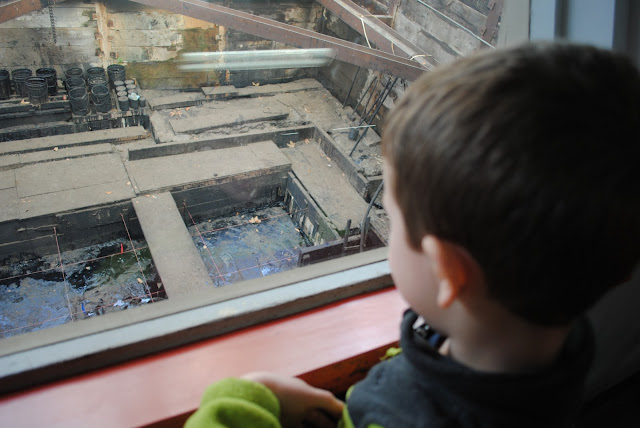 thank goodness for the museum.
the pits themselves are not that exciting. 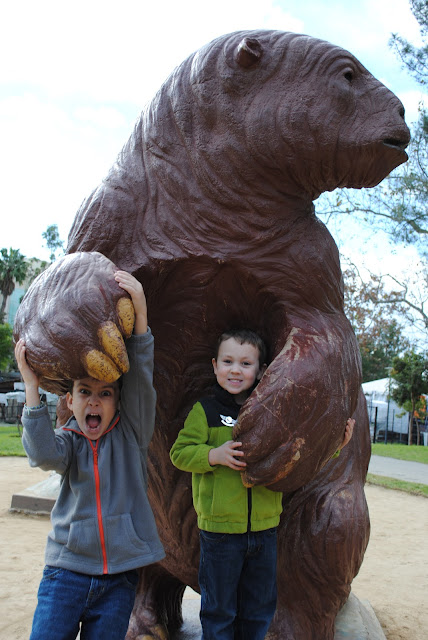 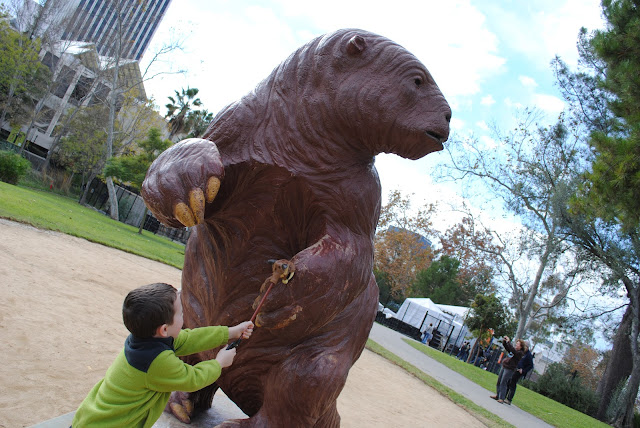 the definition of an unfair battle. 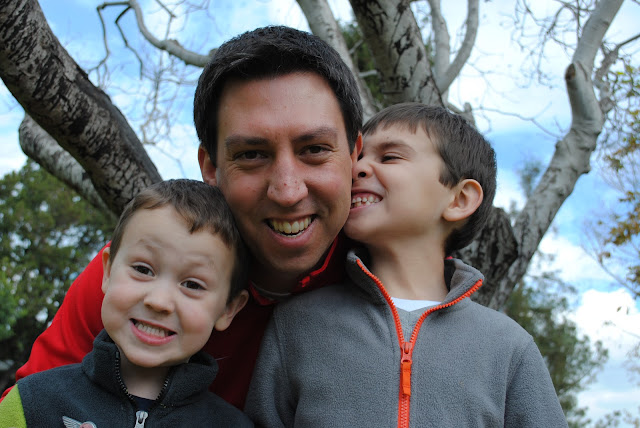 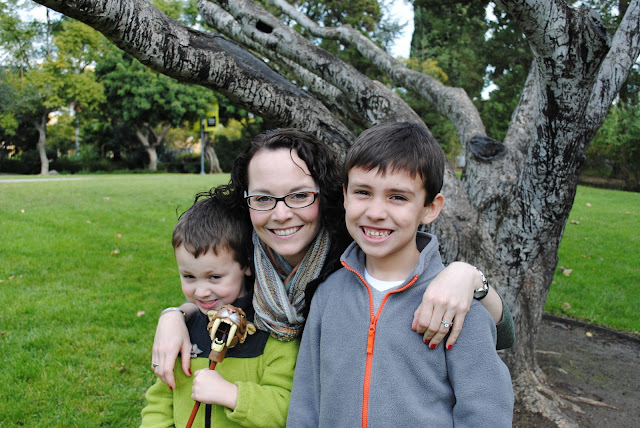