earlier this year, anth had to have a baby tooth pulled to make room for a permanent tooth that was growing in behind it. ﻿
like most little boys, he was concerned about his clothes getting stained.
the whole ordeal actually wasn't much of an ordeal at all, and anth was thrilled to get $5 from the tooth fairy for his troubles.
recently, anth has had a new permanent tooth growing in on the other side.
and his baby tooth didn't look like it would loosen up on it's own.
until the last week or so.
and, little victories, he lost it last night.
during dinner.
(gross.)
(approximately 10 minutes later, benny decided to pretend to be a dog and crawl around on the floor on all fours. in his footie pajamas. and one of his knees slipped on our flooring. and he landed flat on his face. this resulted in all of our emergency "icies" being used at the same time.)
anyway.
anth lost his tooth.
we were getting him ready for bed, and he remembered that my colleague, Curtis, had told him he would get more money if he wrote the Tooth Fairy a thank you note.
we had already explained to him that the tooth fairy leaving him $5 was a one-time deal.
but, he insisted on being polite.
"just in case it works each time." 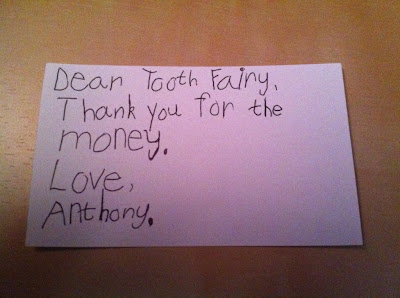 in an effort to reward his kindness, the tooth fairy left anth $2.
suffice it to say, anthony was displeased with his meager earnings.
bern reminded him to practice gratitude.
i told him that this was a 800% increase on what we used to get.
and, bless his heart, he looked horrified at the thought of getting a quarter and ran straight to his piggy bank  to deposit his cash.
♥ posted by momma savvy at 9:26 PM