while bernie and i were at the American College Personnel Association's national convention a few weeks ago, we had the opportunity to go to dinner with colleagues one night at a restaurant called St. Elmo's.
this turned out to be quite a memorable experience.
let's just say it is seared into my memory. . .

as we were being seated, we walked past an area where a sea of shrimp cocktails were being prepared.
they. looked. amazing.
the waiter explained that we had been looking at their "World Famous St. Elmo Shrimp Cocktail."
he explained that it had horseradish in the sauce, and had a bit of a "bite" for the first few seconds.
5 of the 6 of us at the table ordered the world famous shrimp.

when they served it, i was excited to try the sauce.
as a lover of spicy things, i ate an entire spoonful  of it.
it was at this exact moment that i realized the server was a giant raging liar.
or possessed no taste buds/nerve endings.
because i would describe the experience as having more than a "bite" for a few seconds.
unless he meant, "you will be confused, and temporarily think your food has literally bitten your face. off."
he could have also said, "you may wonder, briefly, if you will survive this moment."

it was that spicy.
but in a weird way.
while also being delicious.
i made the mistake, more than once, of breathing through my nose while eating this dish.
each time it was kind of what i imagine snorting a ghost pepper might feel like.

anyway, the restaurant was St. Elmo.
it occured to me later that this dish could be a "fun" play on "St. Elmo's Fire."
other than an amazing 80's movie, i didn't know what St. Elmo's Fire actually was.
based on this shrimp dish, i imagined it was a giant beast creature made of flames.
and razors.
who preys on unsuspecting victims.

turns out, according to wikipedia:
St. Elmo's fire (also St. Elmo's light[1][2]) is a weather phenomenon in which luminous plasma is created by a coronal discharge from a sharp or pointed object in a strong electric field in the atmosphere (such as those generated by thunderstorms or created by a volcanic eruption).

so, i was kind of right.
we were eating a little pile of volcano.

i think our friend Neil, who was not actually there with us, because he is not actually our friend, summed it up well:
“Oh, and I finally ate at St. Elmo! So happy I couldn't stop crying. Partly because we got a table, mostly from the spicy shrimp cocktail.”
– Neil Patrick Harris

these are my only two photos from the evening: 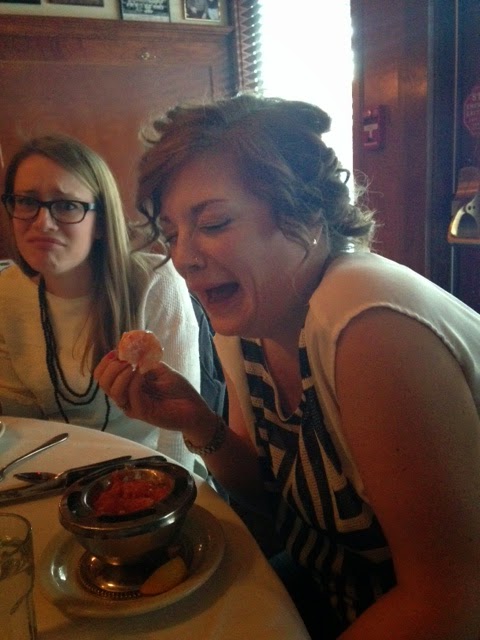 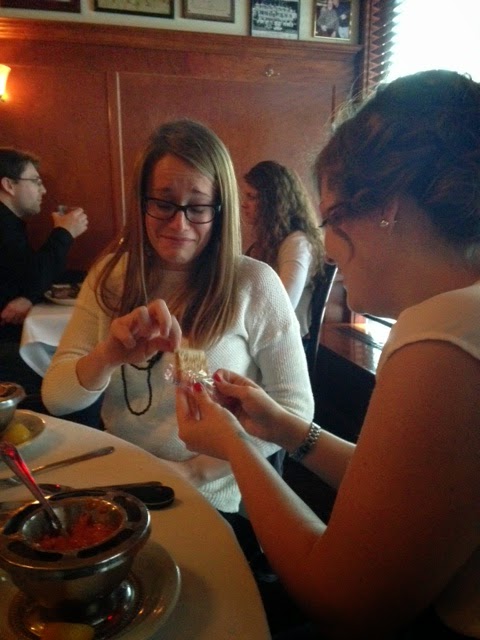 clearly, the first one was a reenactment.
because i could not have actually managed to operate a camera phone while experiencing this dish.
mainly because i was crying.
the second was an actual picture of leslie giving poor sarah a Saltine to dilute the pain.
the best part?
all 5 of us finished all of our shrimp.
that says something about all 5 of us.
i am still examining exactly what it says.
but definitely something.
♥ posted by momma savvy at 2:09 PM